Louise MacLachlan found rust on her four-year-old Ford Ka. But Ford said it wasn't covered by the extended warranty... 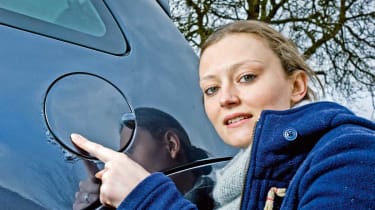 Extended warranties almost always come with loopholes big enough to drive an off-roader through. Yet even we had to raise an eyebrow at the Catch 22 situation Louise MacLachlan experienced with her Ford Ka’s perforation warranty.
The four-year-old city car had started to rust around the filler cap, so Louise, from Knowle, Hampshire, took it to her local Ford dealer to claim on the six-year perforation warranty.
But her claim was rejected, because the car’s last service had been carried out at an independent garage.
This came as a surprise to Louise. The terms and conditions on Ford’s website state that the perforation guarantee is not invalidated if the car is serviced outside the dealer network, as long as the relevant checks are made and the service book stamped. So Louise checked with Ford UK to clarify why her claim was rejected.
“They told me the warranty was invalid because the garage had stamped the service book,” she explained. According to Louise, Ford believed the rust was so bad that it must have been present at the time of the service – so the garage shouldn’t have given her car the all-clear.
“But the rust appeared after the car was serviced,” continued Louise. “It’s ridiculous. The terms and conditions say your warranty is invalid if the garage doesn’t stamp the logbook – but it seems that it’s also invalid if it does stamp it.”
A Ford spokeswoman confirmed the warranty is not invalidated by servicing outside the dealer network. She told us that the claim was rejected as Louise hadn’t brought it to Ford’s attention earlier. “If it was, the extent of the deterioration could have been avoided,” she said.
Yet Ford has changed its tune since Auto Express got involved. The spokeswoman added: “This case has now been reviewed and Ford is happy to assist under its warranty terms.”
The problem A Catch 22 situation: the perforation warranty for Louise’s Ka was invalidated if the garage didn’t stamp her logbook – and if it did, too!

Ford's response Ford said the claim had been rejected because it should have been notified sooner. But it decided to honour the claim after Auto Express got involved.

Legal advice Perforation and extended warranties aren’t like standard three-year warranties. Makers aren’t obliged to let you service your car outside the dealer network, even though Ford did. So check your Ts and Cs closely.

Our verdict Weaselling out of warranty work gives the motor industry a bad name and leaves customers feeling cheated. But at least Ford did the decent thing and agreed to stump up for the repair – eventually.