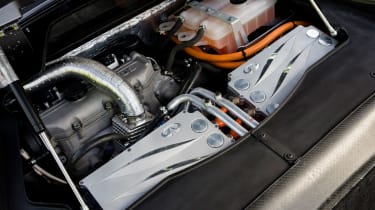 Researchers at the University of Cambridge have revealed a new ‘super battery’ that could replace the current lithium-ion battery found in most electric and plug-in vehicles. The new lithium-oxygen battery (not pictured) is said to overcome many of the barriers that currently limit widespread adoption of electric vehicles.

The lithium-oxygen battery has 10 times the energy density of the lithium-ion batteries currently used, meaning the battery technology would allow vehicles to approach similar range and usability as a conventional internal combustion engine.

Another key issue electric and plug-in vehicles currently face is the high cost of developing lithium-ion batteries, and the extra weight they add to the cars. The cost to replace a battery on a normal electric car exceeds £3,000.

Not only will the lithium-oxygen battery be five times cheaper to develop, researchers say it will be five times lighter, too. The high energy density also helps it to achieve 93 per cent efficiency.

The only drawback, however, is that the technology is still at least a decade away from reaching the production lines - according Clare Grey, the Cambridge professor who led the research. While successful in the laboratory, the system is still not charging and discharging at high enough levels.

Do you think we'll see the new 'super battery' in electric cars in ten years time? Tell us in the comments below..