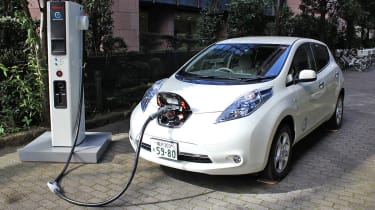 The Government is planning to boost electric vehicle uptake by introducing a grant for business charging points this summer.

Auto Express understands a workplace charging grant will be set up with a formal announcement likely in July. There’s no confirmation on how much the grant will be for but it’ll support companies wanting to set up charging points at offices and car parks.

David Martell, CEO of charging point specialist Chargemaster, revealed: “We have been informed that there is likely to be a workplace charging grant established this summer by the government. “It hasn’t been decided exactly how much the grant will be, but certainly there will be support by the government putting in charging points in work premises.”

And while a spokesman for the Department for Transport and the Office for Low Emission Vehicles did not confirm plans for the grant, he said: “Watch this space. Fitting charge points in workplace car parks is a huge opportunity. We know there is an appetite out there from businesses.”

The Government currently provides discounts for domestic charging points but there is no such grant for businesses. Any scheme would be a huge boost for both companies operating plug-in fleets and dealers selling EVs.

Martell added the grant would be available via charging specialists. He explained: “It will be offered by a number of suppliers [and] we can guide people through the application – in fact, we can complete the application for them. We expect to do quite a large number of workplace units when such a grant is in place.”

Wayne Millward, fleet consultant at leasing company Arval, added: “A lot of companies are saying ‘it doesn’t cost that much to put a charging point in’, but when they look at the electric infrastructure in their building and they’ve got to run a cable for something like 200m to get the power where they need it – that’s where the cost is. Anything that would subsidise that action would be a massive benefit.”