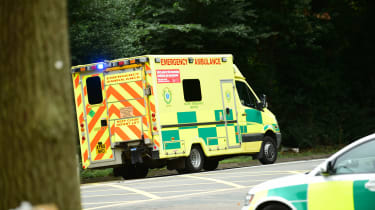 New technology that allows ambulances to interrupt cars’ audio systems and alert drivers of an oncoming emergency vehicle is on trial in Sweden.

Ambulances approaching traffic will use an FM signal to jam motorists’ radios and speakers and stop the music playing. The technology will also send out a voice warning and, where applicable, a warning message on the car’s infotainment system to inform drivers that the emergency vehicle is approaching.

• Every second counts: Riding shotgun with an ambulance crew

Developed by students at the KTH Royal Institute of Technology in Stockholm, Sweden’s capital, the technology is expected to reduce ambulance response times by allowing motorists to move out of the way sooner, as well as prevent accidents with emergency vehicles.

The system is also able to determine how quickly and early a warning has to be sent to drivers based on traffic conditions and is said to be able to interrupt music playing via CDs or Bluetooth as well.

Stockholm authorities are planning to trial the technology on a small number of ambulances and fire engines with plans to extend the tech across the country later in the year.

Mikael Erneberg, an engineering student at KTH who worked on the system said: “Often drivers have only a few seconds to react and give way to emergency vehicles. The optimal warning time is at least 10 to 15 seconds. We wat to catch motorists’ attention at an early stage, and mitigate stress that impairs road safety.”

What do you think of the idea? Should the UK Government pursue a similar system? Tell us in the comments below...