National Grid says uptake of electric cars could take peak energy demand up by 30 per cent by 2050, creating challenges for the industry 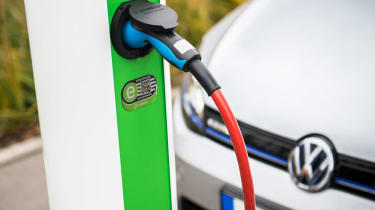 An electric car boom could see peak electricity demand jump up 30 per cent by 2050, according to new analysis.

With electric cars estimated to account for 90 per cent of all car sales by 2050, National Grid forecasts peak time electricity demand could go up by 18GW from today, creating “challenges” for energy providers.

However, National Grid says that the additional peak time electricity demand could be reduced to 6GW through the use of ‘smart’ charging technology that allows electric cars to be charged at different times of the day. The technology would also permit cars with existing charge left to contribute to the grid.

The news comes after MPs said the UK must start upgrading its electric car infrastructure in anticipation of electric cars.

Speaking at a forum hosted by Policy Connect on the future of electric vehicles in the UK, John Hayes MP said that as electric cars become more popular it will become more important to consider their impact on the UK’s power infrastructure, especially if motorists are drawn towards a particular time of day when it comes to recharging.

The minister told those present “We know the demand for electric vehicles places the national grid under pressure. It’s critically important – we are working on this. It’s particularly important that we charge smart, so we flex demand and take advantage of spare capacity”.

He reaffirmed Government plans to vastly increase the number of public electric car charging points, but added that the “aesthetics of electric charging points should be taken as a major consideration”. The minister is considering launching a design competition for the next generation of charging points.

Stewart Reid of SSE notes the plan to have electric vehicle charging that works as a "plug in overnight" system. #FutureElectricVehicles

According to energy firm SSE, most electric car owners recharge their cars immediately after work – during peak energy demand hours. Stewart Reid, head of asset management at SSE told those at the forum that the company wishes to see timed electric vehicle charging infrastructure that works as a “plug-in overnight” system, to reduce pressure on the UK power grid during peak ours and spread out demand.

Do you think timed electric car charging sounds like a good idea? Let us know your thoughts in the comments.