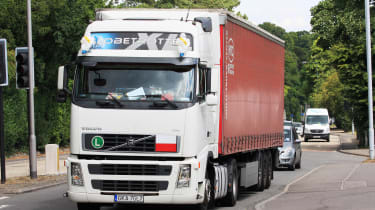 The Government is considering a pay-per-mile road charging system for HGVs, as ministers seek to incentivise hauliers into making the most efficient use of the UK’s road network.

"Our hauliers often complain that a continental trucker comes in with a tank full of lower duty diesel, spends several days working in the country, goes away again and pays nothing towards the use of the roads", Grayling said.

• Driverless trucks to be tested on UK roads

"We already have a system in place that provides some limited contribution, but we're now consulting the industry."

The consultation over HGV road pricing is set out in a Department for Transport (DfT) document, which stresses the Government’s intention is “not to raise more money from hauliers” but to “better support wider Government objectives”, such as improving air quality.

The Transport Secretary made clear any possible pay-per-mile charging system for cars was not coming “in the foreseeable future”. The increasing popularity of electric cars means revenue from fuel duty is likely to fall over coming years, however.

These latest pay-per-mile proposals follow previous plans from the Mayor of London, Sadiq Khan, which would see drivers in the capital charged based on distance travelled.

The proposed road charging scheme could replace the existing Congestion Charge in the future.

Khan announced a new draft consultation report in the summer of 2017 titled the Mayor's Transport Strategy, which outlines new measures to tackle pollution in the city. The proposals include charging motorists on the distance they drive in the city centre alongside other measures to cut car use.

The Strategy proposes “more sophisticated road user charging and/or workplace parking levy schemes,” in the future. It also includes proposals on “a future scheme that reflects distance, time, emissions and road danger and other factors in an integrated way.” How much and exactly how drivers would be charged is yet to be determined.

• London T-Charge: everything you need to know

According to the report, the road charging system could replace the existing Congestion Charge where motorists are charged a flat rate of £11.50 when entering the city centre. The report points out that in the 14 years after the Congestion Charge was introduced, "the challenge facing central London has changed," as more cars are now driving in the city centre during periods where the charge is not enforced. As such, the Mayor proposes keeping all of London's current user charges, including the low emissions zones and ultra low emissions zones "under review."

The Mayor hopes the penalties will push more motorists towards public transport. Sadiq Khan has said he is aiming to reduce the number of car journeys made on London’s roads by three million a day and increase the proportion of journeys taken by public transport from 64 to 80 per cent.

The Strategy also sets out improving road safety in London. The Mayor, through Transport for London (TfL), police, as well as local boroughs is adopting a Vision Zero where no one is to be killed by a London bus by 2030, and with all deaths and serious injuries eliminated from the capital’s roads by 2041.

The Mayor is also considering introducing a measure called “healthy routes” where pedestrians and cyclists would be given priority and roads and parking places would be turned into cycle lanes and pedestrian zones.

The consultation will run until 2 October 2017.

Sadiq Khan said: “As London’s population is set to increase beyond 10 million, our future health and prosperity is more and more dependent on us reducing our reliance on cars.

“We have to be ambitious in changing how our city works. While there will be 5m additional journeys being made across our transport network by 2041, at the same time we’re setting ourselves a bold target of reducing car journeys by 3m every day.

“We have to make not using your car the affordable, safest and most convenient option for Londoners going about their daily lives. This is not only essential for dealing with congestion as London grows, but crucial for reducing our toxic air pollution and improving the health of all Londoners.”

Pay-per-mile is inherently fairer than daily charges that are fixed irrespective of how far you drive and how much you pollute. The most practical way to levy such a charge is for vehicles to be fitted with a telematics ‘box’ which logs where and when you drive and passes this data back over air to a billing system. But the Mayor’s feasibility study will need to answer questions such as whether the in-car hardware supports systems in other cities who follow London’s lead and how occasional visitors will be treated.”

“If Mayor Khan’s pay-per-mile scam is dumped on tens of millions of car drivers living inside or visiting London, trust in and respect for political leaders and their parties will sink to a new low. As he seems keen to make us pay pennies or pounds per mile to drive, why did he not mention this in the manifesto that got him elected? A future Government – Labour or Tory – might spread the p-p-m racket across Britain. Don’t bet against it. But more importantly, don’t – whatever you do – vote for it.”

The Mayor said he will work ‘with those boroughs who wish to develop and implement appropriate traffic demand management measures – for example, local road user charging’. There are 32 London boroughs, plus the City of London and TfL. So we could have 34 charging schemes. This sounds like a nightmare. But we need to act. “Air quality is a problem and eventually the Government will run out of money for roads when people switch to electric cars and stop paying fuel duty or VED.”

The Mayor’s innovative proposals should increase the Low Emission Zone’s effectiveness. A shift to road pricing is an essential requirement to manage traffic demand and tackle emissions. Transport & Environment would like to see lower charges for zero-emission cars and shared vehicles, and higher charges for dirty diesels and gas guzzlers. But the Mayor is definitely moving in the right direction with these proposals and more cities should explore these options for pollution pricing.”

What do you think of the plans for pay-as-you-go charging for motorists? Let us know in the comments...