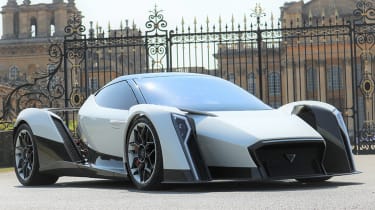 At the 2017 Geneva Motor Show, Vanda Electrics revealed its all-electric hypercar concept, the Dendrobium D-1. Since then the firm has created an all-new company called Dendrobium Automotive Limited, which has been established in the UK with confirmation that the Dendrobium D-1 will be engineered, developed and built here on British soil - with the help of the engineering and Formula 1 experts at Williams Advanced Engineering.

Dendrobium Automotive Limited has brought together “a uniquely qualified management team”, headed up by chairman and CEO, Nigel Gordon-Stewart. Gordon-Stewart brings with him a host of experience in the premium and hypercar markets, with an impressive CV, including McLaren F1, Lamborghini and Lotus.

The Dendrobium is so called because of a resemblance to the flower of the same name, especially with the rear-hinged doors and roof opening system. Vanda Electrics CEO Larissa Tan told us that the car has been designed with nature in mind, so all the details have a link to the natural world. For example, the headlights resemble waterfalls, while the single rear light has a honeycomb design. 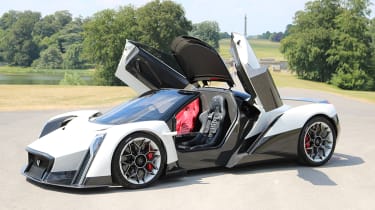 The exterior looks also incorporate elements of the suspension, with exposed struts and springs visible in the wings. Williams Advanced Engineering, the branch of the British F1 team responsible for the Jaguar C-X75 and the Nissan Bladeglider, is working with Vanda to engineer the Dendrobium D-1 - and make it drive as well as it looks.

There are limited details on the car’s powertrain so far, but Dendrobium Automotive has confirmed that it plans to build an in-house pure electric unit, using its own power storage cells. Williams’ engineering head of programmes Ian Cluett told us that the target weight of the car will be no more than 1,750kg, allowing a 0-60mph time of 2.7 seconds and a top speed of over 200mph. The car is built from carbon fibre, with advanced composites and alloys, which are made to be strong yet lightweight.

There’s still no word on the D-1’s range or charge time, but the company is targeting an impressive 1,800bhp and 2,000Nm of torque. While the concept car is rear-wheel drive, Cluett says that the planned production car will be four-wheel drive - and that there is space in the design to accommodate that.

The interior of the concept car we saw at Geneva wasn’t fully functional yet, but the design was close to production-ready. Leather from Scotland’s Bridge of Weir Leather Company clads the seats, but the rest is bare carbon fibre, with minimal instruments and cameras on each side of the wheel to replace door mirrors. There’s a hexagonal theme inside, to continue the honeycomb theme from the exterior inside.

The Dendrobium D-1 will be making it’s UK debut at Blenhein Palace on the 30th August as part of Salon Privé and it will be interesting to see if any changes have been made since its appearance at Geneva.

While this is only a concept for now, Vanda is planning a short production run of “tens, not hundreds” of cars. It’ll carry “a seven figure price tag” north of £1million if it does make production, with each car hand built by Williams in the UK. “[The Dendrobium] may just be a concept for now, but we have every intention of putting it into production,” Tan said - and if that is the case, expect to see the car on the road by 2020.

What do you think of the Dendrobium D-1? Let us know in the comments...