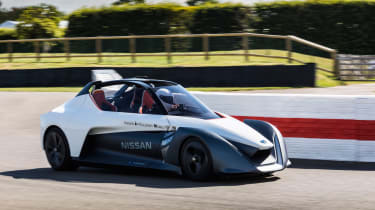 It’s not particularly practical or useable, but the Nissan BladeGlider concept isn’t meant to be. It’s better to judge it on how it does the job of removing preconceptions about electric cars being dull or ‘not for enthusiasts’, and on that basis it’s utterly fit-for-purpose. Our short stint behind the wheel was enough to show how fun, fast and genuinely engaging a production Nissan EV sports car could be. The head-turning design is merely the icing on the cake. It’s just a shame that we’re not much nearer to being able to buy one.

Last year we were treated to a passenger ride in Nissan’s latest version of its dramatic-looking electric sports car concept; the BladeGlider. While that was an exciting vision of the car’s potential, the proof is always in the driving. That’s why we jumped at the chance to get behind the wheel of one of the two working BladeGlider prototypes here in the UK.

The radical three-seater made its British debut at the Goodwood Festival of Speed, tackling the hillclimb in front of thousands of spectators. Thankfully, our time with the car was at the largely empty Goodwood Motor Circuit instead. Nissan has gone to the trouble of bringing both prototypes here to celebrate 70 years since it first launched an electric car.

The Tama, built by the Tokyo Electric Car Company that became part of Nissan soon after, went on sale back in 1947 as an answer to the post-war oil shortage.  Its 4.5hp motor gave a range of 40 miles and a top speed of just 22mph. 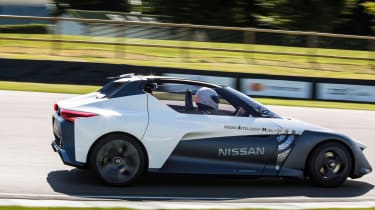 The BladeGlider’s 268bhp and 700Nm of torque demonstrate how far EVs have come since then, although it’s safe to say that it doesn’t represent quite the same leap in terms of range as it does in power output. Nissan says it’s all about “challenging people’s perceptions” that electric vehicles can’t provide the same thrills as petrol-powered sports cars.

The BladeGlider is far more than a numbers machine, though – the excitement builds as soon as you first clap eyes on it. The distinctive tapered nose, wraparound windscreen and very narrow front track make it look more like a jet fighter than any conventional sports car, while the scissor doors add to the arresting visuals. The arrow-like shape is a result of the lack of a combustion engine in the front, and allows it to slice through the air more efficiently. 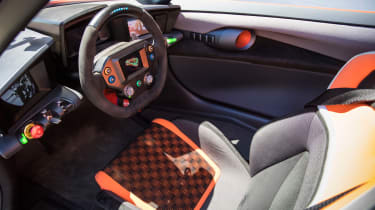 Drop down low into the McLaren F1-style three-seat cockpit and you’ll find a surprising amount of room, with two adults able to sit either side of the driver for short journeys. The minimalist dash looks pure racing car but with a high-tech twist, with two displays instead of door mirrors and a wheel-mounted screen to show things like battery capacity.

0-62mph in five seconds might not sound like much when we’re now used to Teslas doing the same sprint in nearly half that, but when you’re sat so low to the ground and there’s no roof, it’s more than startling enough. The instant torque from the two Williams-developed 130kW electric motors mounted inside the rear wheels fires the 1,300kg BladeGlider out of the pits with relentless force, with only the pronounced whine of the motor and the building rush of air as the aural accompaniment. It’ll keep going to 119mph, which doesn’t sound like much but feels fast here.

Take one look at the width of the front track and you’ll be forgiven for thinking the car will topple over come the first bend. The steering adds to that feeling at first, as it’s so direct and quick that it seems quite nervy. You soon adjust to it, though, and as you build confidence you realise that the BladeGlider grips gamely and corners with composure.

The Ferrari-style multi-mode traction control, operated via the steering wheel, allows everything from full traction lockdown to a ‘drift’ mode, although we weren’t allowed to fiddle with it for fear of stuffing a priceless prototype into the scenery.

Two laps of the track were enough to make a sizeable dent in the car’s displayed range, but Nissan engineers point out that the car is designed to demonstrate performance potential rather than advances in battery life. Bosses also wouldn’t commit to the BladeGlider morphing into a production model, saying instead that it teases what a battery-fuelled Nissan sports car could feel like in a decade or so.

Even so, it’s really encouraging to see that at least one carmaker is looking at ways to make electric cars appeal to enthusiasts. In a world of impending autonomy and ever-increasing vehicle legislation, it’s refreshing to see.