Gumpert unwrapped the world’s first methanol-electric supercar at Geneva this year, with a claimed maximum power output of 539bhp 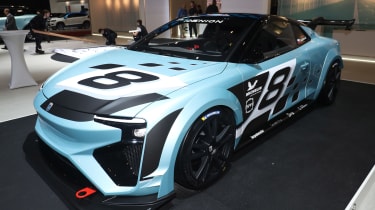 Gumpert unveiled the world’s first methanol-fueled hydrogen-electric supercar at this year’s Geneva Motor Show. Called the Nathalie, it has a claimed range of 850km (around 528 miles) between fuel stops and a top speed of 186mph. Just 500 examples will be built, with production starting in 2020.

Built in collaboration with the Chinese EV manufacturer, AIWAYS, the Nathalie features four electric motors and twin, two-speed gearboxes; all of which are mounted in-board rather than at the hubs to reduce unsprung mass. Gumpert claims it will produce 539bhp and 900Nm of torque, allowing a 0–62mph sprint of 2.5 seconds.

Unlike most electric cars, the Nathalie features a two-speed transmission. A short ratio gear is used for the sprint from 0–62mph, followed by a longer ratio for high speed driving. Also, the Nathalie’s gear changes are staggered for uninterrupted acceleration, with the front axle’s transmission shifting first, followed by the rear. 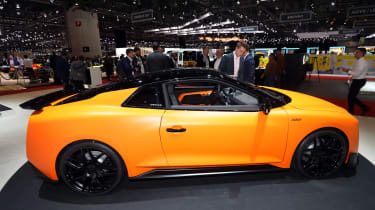 Braking is primarily handled by the electric motors, as all four units are fitted with an energy recuperation system, activated by the brake pedal. However, when the driver’s braking requirements exceed the limit of the motors’s capability, a hydraulic system automatically engages to decelerate the car.

The Nathalie has a weight distribution of 48:52 front/rear, and a torque-vectoring system automatically distributes the Nathalie’s power to the wheel with the most grip. Gumpert claims the system is capable of providing high cornering speeds and seamless acceleration on both dry and wet road surfaces.

Gumpert’s methanol-electric generator uses a mixture of methanol and water as an fuel source, generating a maximum energy output of 5kWh. The firm claims the system is safer than older hydrogen fuel cells and more economical to run than a conventionally-powered petrol car, with methanol being an average of 33 percent cheaper than petrol.

Inside, the Gumpert Nathalie gets a networked infotainment system with sat-nav, a G-Force meter, an energy status meter and a read-out which provides recommended cornering speeds.

Pricing for the new Gumpert Nathalie is yet to be announced, but the manufacturer confirmed last year that it “will be expensive.”

Are you excited about the Gumpert Nathalie? Let us know in the comments section below…