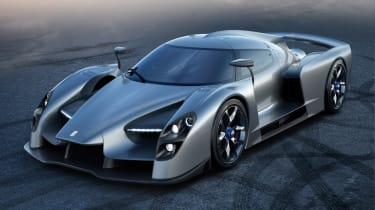 The Scuderia Cameron Glickenhaus SCG003S is a new road-going version of a race car making its debut at the Geneva Motor Show 2017, and the company is hoping that the car will be able to be the faster-ever road car around the Nurburgring.

The SCG003 comes in two forms, Competizione and Stradale (C and S), with the first being a racing car and the second being this hardcore roadgoing version. The car has been designed with Le Mans prototype racer technology, and there are supposedly minimal differences between its two versions: it really is a racing car for the road.

The car is built using carbon fibre, like all the best race cars, for structural rigidity and a light weight: less than 1,200kg. It features a 4.4-litre twin-turbo V8 engine with over 800bhp and 850Nm of torque. That means it'll do 0-62mph in less than three seconds. A top speed of over 217mph stands it in good stead for the lap record, which is currently 6m48s, set by a Radical SR8 LM. 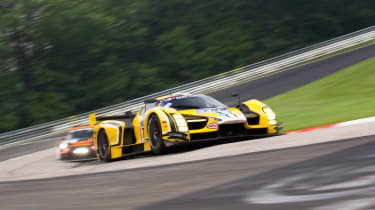 To boost its performance on the track, the car gets push-rod suspension at the front and back, carbon-ceramic brakes and high-performance Dunlop tyres. It also features a motorsport-focused seven-speed sequential gearbox for the best on-track performance.

Downforce of over 700kg at 150mph will help it to take on the lap record, with cornering forces of more than 2g. SCG claims the car will manage a time in the region of 6m30s.

See all the latest news and concept cars on our Geneva Motor Show hub.