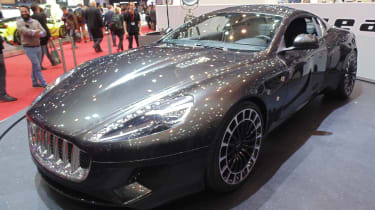 Kahn is back with a Vengeance - and here's what it will look like. The British design house has revealed the new coachbuilt two-door supercar at the 2016 Geneva Motor Show. Based on the Aston Martin DB9, It will be hand-built in limited numbers, with prices expected to start at £300,000.

Codenamed the Vengeance, the car is designed to hark back to the glory days of British coachbuilding and arrives later this year. The Vengeance uses an Aston Martin DB9 chassis, structure and interior but on top sits a brand new body designed to “evoke the silhouette of a sabre tooth on the prowl”. 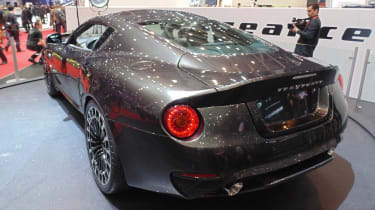 Large 20-inch ‘roulette’ designed alloys feature at the front while even bigger 21-inch wheels are used at the rear. A seven-bar vertical grille gives an aggressive look while further along the flanks, the Vegeance uses key Aston Martin designs themes from the 1980s and 1990s – such as the circular rear lights borrowed straight from the DB7 Zagato.

Kahn said the two-door coupe will be built in the Midlands as a nod to Britain’s manufacturing heritage, and a limited run of cars will be built. Each car will carry a plaque in the boot signed by every member of the team who built it, and every owner will be given previews of future bespoke Kahn cars and invitations to buy them. 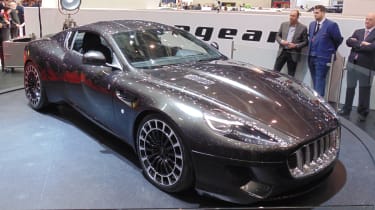 Owner and founder Afzal Kahn said: “The Vengeance underlines Kahn Design’s expertise in design and coachbuilding. With a team of over 25 designers in house we’re involved in all aspects of product design from automotive to timepieces, interiors, retail space, clothing and accessories.

“Aston Martin has always been an inspiration, in particular the early Vanquish and the V600 Vantage wide bodies, and I’m grateful for their agreement, and for wishing us success on this project.

“The Vengeance pays homage to those classic designs while using modern engineering to create something unique and original which reflects my own style.”

Full prices are yet to be confirmed and when it arrives later this year. While £300,000 might seem steep, prospective owners will undoubtedly deem the £500,000 David Brown Speedback GT (which uses the Jaguar XKR as its base) as a key rival, making it good value in that regard.

How do you rate Kahn's chances of breaking into the luxury coachbuilding market? Let us know in the comments section below...