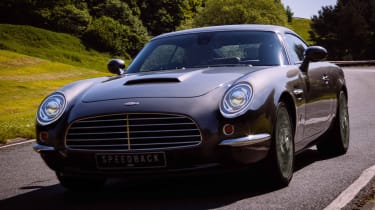 For the majority of us it’s hard to get your head round a £500,000 coachbuilt XKR but you won’t feel shortchanged by the quality, design and materials on offer in the David Brown Speedback GT. With extra comfort, that great V8 engine and the fold out picnic seats in the boot, the Speedback captures the spirt of sixties GT cars better than any other. There’s no escaping the Jaguar switchgear or infotainment system, though.

The David Brown Speedback GT is a coachbuilt retro-inspired British car using Jaguar XKR Convertible underpinnings, and commanding a £500,000 price-tag. It’s an eye-watering figure but one that begins to make sense when you get up close with it.

The aluminium body has some wonderful, elegant lines in it, the gunmetal paintwork takes 120 man hours to perfect and shines with a subtle burgundy under sunlight (hence its Guns ‘N’ Roses name) and those wire wheels are a work of art. The chrome brightwork was even deemed a little too bright, so was coated in copper first, then chromed to dull the effect ever so slightly.

The interior layout is familiar but feels infinitely more special than the XKR’s. The dials have new jewel-like numbers, the steering wheel is a wooden masterpiece and many of the switches are now finished in polished metal. They even glow gently at night. Unfortunately your hamstrung by having to use the same old Jaguar infotainment system, though. 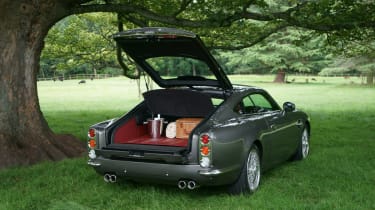 In terms of the way it drives, it has the incredible performance of an XKR. The supercharged 5.0-litre V8 not only sounds good but delivers the low-end torque that the team wanted from this car, designed more as a relaxing cruiser than an out-and-out sports car. There’s even a pair of rear-facing seats that flip out from the boot floor so you can set up a picnic en route.

The wire wheels are 19-inch units but the tyres have got particularly thick side walls to provide an extra element of comfort. It does the trick, too, gently cushioning the ride over sharp bumps that would have caused a thud in the Jaguar.

In terms of its handling, the GT boasts the same nice, quick steering as the XKR so it always feels nimble. With a little more flex in the tyres, it doesn’t feel quite so flat through tight bends but it’s a trade-off we’re more than happy with. 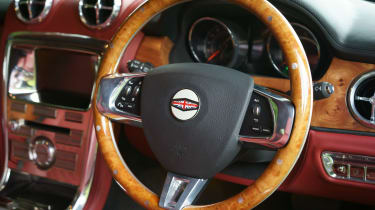 After all, the Speedback GT is designed as a car that offers the elegance and style of a sixties classic, while adding modern technology and reliable mechanicals. In the super-rich world of the buyers of this car, it’s something more bespoke and more unusual than a run of the mill Ferrari or Aston Martin. Clearly, it’s a small market but the fact that six buyers have already put down a 20 per cent deposit on a GT proves that David Brown may just be on to something.