Apollo has unveiled its new Arrow supercar, after changing its name from Gumpert under Chinese ownership 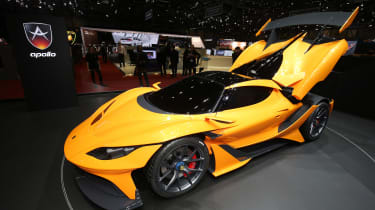 Apollo Automobil has pulled the covers of its storming new Arrow supercar at the Geneva Motor Show. Previously dubbed Gumpert, the German brand received financial support from a Chinese firm to build a 1,000bhp supercar.

The Arrow is a mixture of German and British engineering, with a team of UK designers working on the dramatic body and a new 4.0-litre bi-turbo V8 supplied by Audi. It produces 986bhp, the same as a McLaren P1 GTR, and nearly 1000Nm of torque. 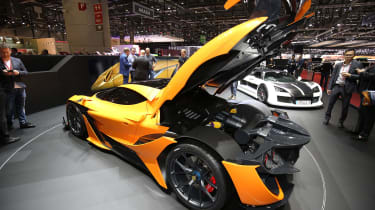 It revies the tubular spaceframe chassis first seen in the original Gumpert Apollo, sitting around a carbon tub. The whole car is said to weigh less than 1,300kg. Predicted performance figures are a 0-62mph time of 2.9 seconds and a 224mph top whack.

The Arrow's cabin is said to be more spacious than the old Gumpert-badged car, and when a road-going model goes on sale in the future it'll be offered with satnav and aircon, shunning its stripped-out look. No pricing details have been confirmed.