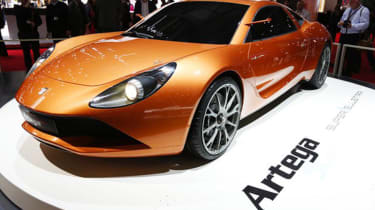 This is the Artega Scalo Superelletra by Touring, a new low-volume sports car unveiled at the 2017 Geneva Motor Show.

Artega is a German sports car manufacturer with a colourful recent history. After hitting the market just before the 2008 recession, it was sold to Mexican buyers in 2010 and folded in 2012. Now it’s back under the leadership of founder Klaus Dieter Frers, and planning this entrant into the electric supercar segment.

The Scalo Superelletra is named after a German race horse, and Artega plans for it to deliver more than 1,000 horsepower, along with seating for three and styling by Carrozzeria Touring Superleggera of Milan. Production is scheduled to begin in early 2019, and will be limited to 50 units. 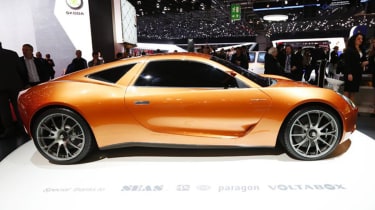 Details are thin on the ground, but reports suggest the car will have four water-cooled electric motors with a total power output of 750kW, or 1,006bhp, and total torque of 1,620Nm. The chassis is made of carbon fibre reinforced polymer (CFRP), with steel sub-frames front and rear.

A range of 500km is also claimed with a recharge time of just four minutes yielding a 100km top-up, and only 17 minutes needed to get the lithium-ion batteries up to 80% capacity. Top speed is quoted as 186mph, with 0-62mph covered in a distinctly lively 2.7 seconds. 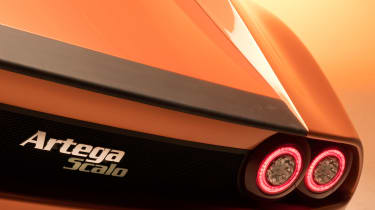 The design renderings of the Artega Scalo Superelletra reveal the classic sports car lines that design house Touring is best known for. The driver sits centrally and slightly to the front with passengers positioned either side and further back in the cabin, similar to a McLaren F1. Traditional door mirrors are replaced by video cameras, judging from the pods on the A-pillars.

Plans for building the car are unconfirmed but would possibly involve the aluminium and composite bodywork being made by Touring in Italy and shipped to Germany, where the completed Artega Scalo Superelletra cars would be assembled. Pricing is said to be in a the £850,000-£1.3m ballpark.

What do you think of the Artega Scalo Superelletra? Let us know in the comments...