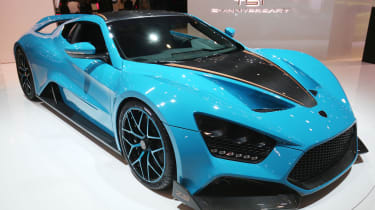 Danish performance car manufacturer Zenvo has hailed its 10th anniversary with a “unique, one-off” hypercar called the TS1 GT, and it's been officially revealed at the 2017 Geneva Motor Show.

Powered by an already monstrous 5.8-litre V8, the TS1 GT has two superchargers thrown in for good measure, increasing output to 1,147bhp at 7,700rpm and producing 1,100Nm of torque.

The engine is so fierce that Zenvo has had to construct a new seven-speed transmission to cope with the increased level of performance, promising shift speeds “not far off” those of a Formula One car.

Meanwhile the top speed of the TS1 GT has been electronically limited to 233mph, and it’s capable of 0-62mph in 2.8 seconds. 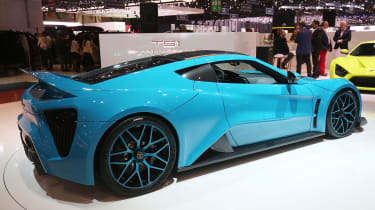 “Presenting this car at Geneva and celebrating our 10th anniversary makes me very proud and humble,” said Zenvo founder Troels Vollertsen. “We have achieved so much with a small team of highly dedicated and capable individuals.

“All of us recognise our heritage as pioneers of technology and remain totally committed to continue to produce and develop Zenvo cars which provide our owners and drivers with a sensational experience of performance, quality and perfect driving pleasure.”

Coated in Fjord Blue paint, the TS1 GT makes extensive use of carbon-fibre and other weight-saving measures to achieve a dry weight of 1,580kg.

Zenvo has yet to release images of the interior, although it insists that the cabin is completely original and entirely hand-made, requiring 8,000 working hours to complete all of the detailing.

The switches and instrument surrounds are “totally bespoke” having been forged from copper and rhodium, and according to Zenvo these parts alone cost as much as a Porsche 911 R.

This implies that the price for the whole car rests at the steep end of the curve, and while no official figure has been given, some reports suggest a price tag of around £1million.

Whatever the price, the TS1 GT has a lot to live up to: Zenvo has christened it ‘Sleipnir’ after the “fastest and best” eight-legged horse ridden by the Norse god Odin in Scandinavian mythology. No pressure, then...

What do you make of Zenvo's latest offering? Let us know in the comments section below...