Triumph’s 1200cc, twin-cylinder retro roadster doesn’t have the raw performance of its Sixties namesake, but compensates with style 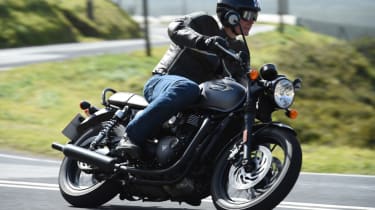 When Triumph set out to create a new-generation Bonneville family, the company aimed to make the T120 roadster more beautiful, powerful and capable – and it succeeded on all three counts. The Bonnie’s softly tuned, 1200cc engine means it doesn’t come close to emulating the all-conquering pace of its legendary Sixties namesake, but it’s fast enough to be fun, handles competently, if rather conservatively, and by naked retro-bike standards, is impressively comfortable and well equipped. Just as the original Bonneville was a success, because its combination of style and performance hit the mark half a century ago, its modern descendent appeals for much the same reason.

The Bonneville T120 is, in many ways, the most high-profile model in Triumph’s Modern Classics range of parallel twins, which has recently been comprehensively overhauled to take in the sporty Thruxtons, custom-style Bonneville Bobber, dual-purpose Street Scrambler and entry-level Street Twin and Street Cup.

The larger-capacity Bonneville itself comes in two flavours: the standard T120 and the T120 Black, which differs with its brown seat and blacked-out finish on other parts, including the engine, exhaust and wheel rims. With a base price of £10,100, rising to £10,400 with two-tone red and silver paintwork, the Bonnie isn’t cheap, but it is competitive against rivals including BMW’s R nineT models and Harley-Davidson’s Roadster. It’s also well equipped and has an excellent level of finish. 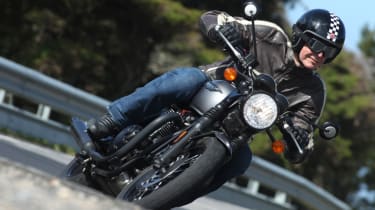 This Bonneville’s 1200cc, liquid-cooled, SOHC parallel-twin engine is very different to that of its recent predecessor’s – which was air-cooled and had twin overhead cams – let alone to the 649cc, pushrod-operated unit of the original, 1959 Bonnie.

That first T120 was a hot sports model, but the modern Bonneville’s ‘high-torque’ motor is softly tuned, producing its maximum torque at just 3,100rpm and going on to generate a fairly modest maximum of 79bhp, delivered via a smooth-shifting six-speed gearbox. 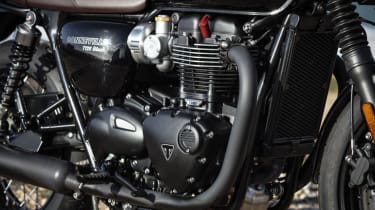 Where it gains most over the last, Hinckley-developed engine is style and refinement. It’s very well finished and features numerous neat details, including the machined cylinder fins, gold-topped throttle bodies styled to resemble carburettors, and smoothly routed, double-skinned exhaust downpipes. It also incorporates modern features, such as a choice of riding modes, ‘ride-by-wire’ throttle (with no mechanical linkage to the accelerator) and traction control, while looking determinedly traditional.

This modern Bonneville is a laid-back performer, with plenty of gentle charm, but little of the raw performance that made its Sixties namesake a legend. It pulls sweetly from below 3,000rpm, and accelerates strongly through the mid-range. A top speed of about 120mph just about lives up to the T120 suffix – the original 650cc model was given that name after its maximum speed – but its upright, wind-blown riding position encourages a more gentle pace, even if the modern unit generates much less of the traditional parallel-twin vibration at high revs. 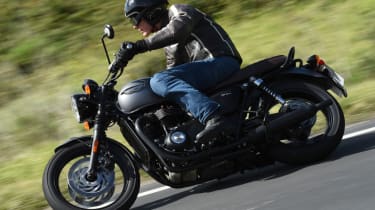 The chassis maintains the period feel by being designed for stability, rather than agile handling. Its steering requires a fairly firm input, partly because the Bonnie is on the heavy side for a naked twin. However, its gaitered front forks and twin rear shock units give very good ride quality and are taut enough for enjoyable cornering. Twin front brake discs provide plenty of stopping power, and the Triumph’s ground clearance and tyre grip are also very adequate.

Triumph’s new-generation parallel-twin engine is impressively economical, to the extent that some riders average over 60mpg; and, even enthusiastic use of the throttle rarely brings the figure below 50mpg. Running costs are also helped by service intervals that are increased to 10,000 miles from the previous Bonneville’s 6,000, although many riders opt for an annual service. 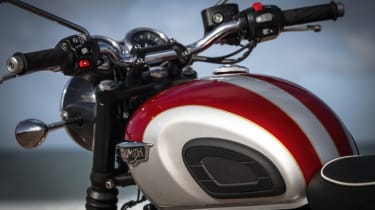 Triumph’s twin-cylinder models have a good reputation for reliability, in contrast to that of the previous, Meriden-based Triumph firm, whose bikes were troubled by oil leaks and problems before the firm closed in the Eighties. The current engine’s liquid-cooling helps maintain temperatures and the bike’s softly-tuned character should enhance longevity. The warranty gives standard two-year, unlimited-mileage cover.

The latest Bonneville’s stylish, retro design and excellent build quality are among its greatest assets, and give the bike an appeal that its air-cooled predecessor, for all its merits, never quite matched. Modern features such as the traction control system are carefully concealed from view (as is the necessary emissions-limiting hardware), but waiting in the background until required. This Bonnie is carefully designed to look simple, but is impressively refined. 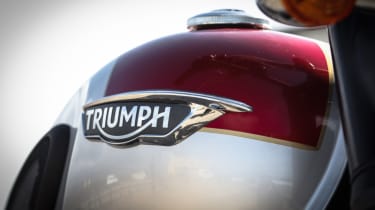 Its modern technology adds to its practicality, too. Stylish clocks incorporate digital displays, such as a fuel gauge and consumption reading. The shapely fuel tank holds a modest 14.5 litres, but the engine’s economy means that’s sufficient for a range of 150 miles or more. The dual-seat has a sturdy grab-rail and plenty of room for a passenger, while it’s fairly low at 785mm, and there’s a USB socket underneath. Despite the bike’s dry weight of 224kg, the centre-stand is easy to use, and the mirrors work well. Finally, the comprehensive accessory list includes more than 150 parts, from fashionable bench seats to alternative exhaust systems.