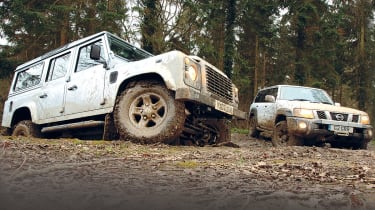 Very few cars have such a legendary status as the original Land Rover. Now known as the Defender, it is the pioneering go-anywhere, do-anything vehicle. And since its introduction nearly 60 years ago, the car has been exported all around the world. It is still the choice of transport for the British Armed Forces.

The model has come a long way since Maurice Wilks, Rover’s technical chief, decided to fit a war surplus chassis with a Rover engine and gearbox and craft a simple body from aluminium. The 4x4 was aimed at the agricultural sector, yet even Wilks couldn’t have foreseen the Land Rover’s success, with more than 1.8 million built since 1948.

But after so long in production, the Defender is showing its age. To bring it up to date, there’s a new model with more than 700 changes, including a fresh cabin, a new diesel and a six-speed gearbox. Here, we pitch the Land Rover against Nissan’s rugged Patrol. The Japanese model is a rare sight, yet is still a tough performer. Can it outmuscle the Defender?

When it comes to true off-roading, one car has remained unbeatable – the Land Rover. And that’s still the case with the latest Defender. The changes are hard to spot from the outside, but the new cabin – especially the dashboard, centre console and seven-seat layout – gives a more sophisticated feel than previous models.

That’s not to say the Defender has gone soft. It’s still superb over tricky terrain and can cope with just about anything. The new, smoother engine and six-speed gearbox make it more user-friendly than ever, while the on-road driving experience is more refined, although there’s no doubt you are in a proper 4x4.

The Patrol is a strong performer, though, and shouldn’t be discounted. The huge Nissan is a real beast on and off-road but, although build quality feels rock solid and the interior is spacious, the trim is poor and the dash layout is dated, even alongside the Defender. It’s a near match for mud-plugging ability and gives the same invincible feel from behind the wheel, but it’s woeful on tarmac. Nor can it match the Land Rover’s charm or class.