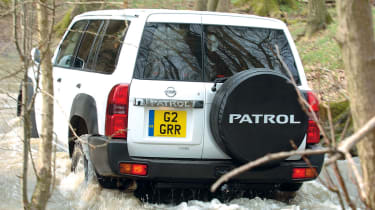 Although it’s a rare sight on UK roads, the Patrol may look familiar to you, particularly in the Arctic White shade of our test car. That’s because it’s frequently seen on news reports – as it is the favoured vehicle of the United Nations. At more than five metres long and nearly two metres wide, this is a huge and imposing machine. Even at a time when SUVs are getting bigger, the blunt Patrol still has great presence.

However, getting in and out easily is hampered by the wide tread sills (not ideal in muddy situations) and, while the cloth-upholstered seats are comfortable, they don’t appear very hard-wearing. The Trek is the entry-level version and, without the range-topping model’s luxuries such as leather seats and sat-nav, the cabin’s bland design is exposed, and it appears dated. The driving position is poor, too, even if there’s more space than in the Defender, and the plastics look cheap. The same can be said for the shiny steering wheel, which feels too large when driving off-road.

Things can only improve and, thankfully, they do for rear passengers. Even with three adults in the back, there is plenty of space. Head and legroom are excellent – of the two cars here, the Nissan is more comfortable on a long journey, and offers better visibility. Folding the rear seats is simple, and the chairs themselves are much lighter to flip up than those in the Defender.

In Trek trim, the Patrol is not offered with seven seats, but they are available in the Aventura, which costs £4,000 more. As a five-seater, though, the Trek has a long, wide load area, which helps to make it a better load-lugger. But as there’s no rubber floor mat (a standard feature on the Defender) and non-removable carpeting, keeping the boot clean isn’t easy.

Yet off-road these shortcomings are soon forgotten. There’s very little the Patrol cannot handle, although its considerable width can be a problem when you’re trying to negotiate narrow tracks. It has slightly larger overhangs and less ground clearance than its rival here, too. Over our off-road route, it followed in the footsteps of the Defender, but often had to be worked harder, and didn’t quite take things in its stride so easily.Overall, though, the Patrol excels off-road.

But it is woeful on tarmac. The 3.0-litre Di engine is dated, and the coarse powerplant feels sluggish on the move, while hard acceleration results in loud diesel clatter. The five-speed box doesn’t help either – a long second gear makes town driving hard work, while the vague throw makes the Defender’s set-up seem almost sporty.

Then there’s the handling. Despite the Land Rover using a Ford Transit-sourced engine, it’s the Patrol which behaves more like a van. There’s virtually no feedback through the low-geared steering, and the soft suspension struggles through bends with awful body roll. True, the off-road tyres don’t help – but the Land Rover is fitted with similar rubber, and is altogether more composed. The Nissan is limited to 99mph, yet that seems too fast when you realise how worryingly unstable the Patrol feels even at motorway speeds. The situation is not helped by the soft brakes that do little to inspire confidence.

Finally, although the entry-level Trek costs £500 more than the base Defender, it undercuts the County model which we’ve tested here. However, in its favour, the Nissan does offer the benefit of twin airbags for front passengers (alarmingly, the Defender comes with none), as well as powered rear windows.

The Patrol costs less to maintain, its first three services totalling £930. But it needs attention 3,000 miles sooner than its British rival, with intervals only 9,000 miles apart.

Nissan’s 4x4 line-up is impressive but the Patrol has the accolade of being the worst-performing off-roader in terms of residuals in the firm’s range.

As both motors are in the top 35 per cent bracket, the sole factor to affect tax is price. While the Patrol is cleaner, its lower cost means top band owners get a £3,359 bill.

With a default two-wheel-drive setting you’d expect the Patrol to be considerably less thirsty. Yet the Nissan returned only 19.5mpg. A huge 95-litre tank gives a good range.