While owners of the big Discovery raved about their car in Driver Power, its little brother is making a splash in the class. 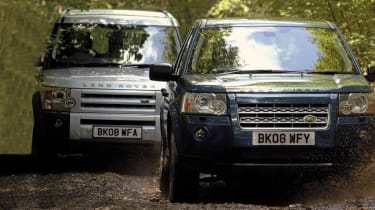 This clash has a twist: both 4x4s have already made their debut in the Driver Power top 100, and both are built by the same manufacturer.

Land Rover’s fortunes in the Auto Express owner satisfaction report have taken a dramatic turnaround. Where once the firm was slated by respondents, its latest models are now revered – to the extent that the green oval snatched the top two places in the 4x4 class ranking. Compare the latest generations of the Freelander and Discovery to their predecessors, though, and this change is easy to explain.

Woeful reliability, dismal dynamics and dated designs all meant the old-shape 4x4s had to be consigned to the history books. Under the stewardship of Ford, Land Rover reinvented itself with new versions of its compact and full-sized mud-pluggers, both of which had more in common with the luxurious Range Rover than their predecessors.

So why have we brought them together here? Well, while the Discovery 3 topped the 4x4 class in Driver Power 2008, we reckon the Freelander 2 has nearly as much to offer in a smaller, more efficient and cheaper package.

At first glance, the Disco has huge road presence due to its sheer scale. Rather than hide its dimensions, designers have made a feature out of them, with flat panel doors and a classic Land Rover bonnet line. Now a familiar sight on our roads, it looks solid and secure… but it’s not to everyone’s taste.

As city centre 4x4 drivers are put under pressure from green lobbyists to downsize, the more compact Freelander 2 is becoming the socially acceptable choice. Mixing cues from the Discovery and Range Rover, it’s a well proportioned SUV. Climb inside either model, and the cabins are among the most robust and durable on the market. Land Rover has stamped its own brand of rugged design throughout, with everything from the chunky buttons on the dash to the strong, rubbery trim.

Take a seat in the back, and there’s an unlikely winner in the space race – the Freelander offers 20mm more legroom, at 710mm. Run the tape measure anywhere else, however, and the smaller model is fighting a losing battle against one of the most practical cars on the planet.

The first victory for the Discovery comes courtesy of its third row of seats. Two surprisingly comfortable chairs are pulled out of the floor, allowing the big Land Rover to carry seven adults in comfort. Fold all the rear seats and you are left with an enormous flat luggage area, measuring an amazing 1,840mm in length and a huge 2,476 litres in capacity. All this explains why the 1,670-litre Freelander came 31st for practicality, while its big brother ranked second in the 2008 chart.

Few drivers were put off by the Discovery’s size on the road, either. Keen to emphasise the manoeuvrability of their 4x4s, owners voted it into first place overall in the ease of driving chart, ahead of the Freelander in seventh position.

Take the wheel of the Disco and its dimensions are rarely a concern, but you are constantly aware of its huge weight. While the suspension does a fine job of keeping the body in check when cornering, if you enter a bend too fast or brake suddenly, the big mud-plugger pitches and rolls far more than the agile Freelander.The compact SUV also offers the benefit of being able to fit through smaller gaps, and so is just as adept at rumbling over speed humps as it is at following the Discovery down a rutted muddy track. One thing all Land Rover buyers love is the way their cars smooth out the bumps on the tarmac – and both models are great long-distance cruising companions.

Whichever you choose, your model will be best suited to an automatic transmission to go with its diesel engine. But it’s the Freelander that is the stronger performer. While the 0-60mph sprint times are near-identical, real-world overtaking is a more realistic proposition in the smaller model thanks to its in-gear thrust.

So for those buyers who need five seats rather than seven, the choice is clear. And as well as offering superior dynamics, the Freelander allows owners to save a stack of money.

A mid-range model is yours for £25,805 – to get the keys to an equivalent Discovery, you will need to spend £35,500. Add to this big savings in fuel economy, CO2-based tax and servicing, and the Land Rover ‘baby’ makes a really strong case for itself.

We look forward to seeing whether the more frugal model can close the gap on its big brother in Driver Power 2009.

Compact executive car test: Audi A4 vs Lexus IS