Months before Mercedes' AMG high-performance arm launches its supercharged C32, Brabus has already set the pace for building the fastest C-Class on the planet. And we were first to take to the road in the mind-blowing sports saloon that will outrun a Ferrari. 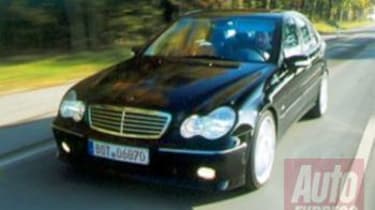 Months before Mercedes' AMG high-performance arm launches its supercharged C32, Brabus has already set the pace for building the fastest C-Class on the planet. And we were first to take to the road in the mind-blowing sports saloon that will outrun a Ferrari.

With a 400bhp, 5.8-litre V8 powerhouse under its slatted bonnet, the CV8 Brabus blasts to 60mph in only 4.7 seconds, then accelerates hard right the way to 185mph. Scary stuff indeed. But then if any company is capable of building a car like this to an outstanding standard, it's Brabus. 'The CV8 is a logical car for us to make because we have a lengthy history of fitting tuned V8 engines into com-pact Mercedes,' Brabus founder Bodo Buschmann explained. 'We made the first 5.0-litre 190E in 1984, and our original CV8 was running in 1994, long before the AMG C43 hit the road.' Last year, AMG announced a special order-only C55, with a 354bhp motor taken from the E55. But the new 5.8-litre CV8 Brabus easily betters this by producing 400bhp at 5,750rpm, and delivering a knockout blow of 580Nm of torque from 3,000rpm.

Others seem to agree with this big-is-better V8 philosophy, and 10 customers have placed their orders since the CV8's international debut at the Paris Motor Show in September. What's in store for them? Well, the engine fires up with the deep 'whoof' that can only be produced by a powerful V8. Blip the throttle pedal and the compact Mercedes rocks to the rhythm of the huge torque output. You just know that driving this car is going to be fun.

Slip the automatic transmission into Drive and gently ease down the throttle pedal. Even in damp conditions the big 19-inch tyres dig in and launch the C-Class forward with help from the traction control system. But not without some tail-wagging and a wildly flashing ESP (electronic stability program) warning light. Yet even under full throttle the beefed-up gearbox slurs its upshifts as impeccably as a standard Mercedes. And before you realise it, the CV8 is easily doing three-figure speeds, while that mighty shove-in-the-back feeling has only gently abated.

The way this car devours German autobahns catches the drivers of other vehicles unawares. What appeared in their rear view mirrors a few seconds earlier as just another new C-Class in the distance is quickly knocking on their tailgates. And unless they are at the wheel of a Porsche 911 Turbo or Ferrari 360 Modena, they would be well advised to move out of the way of this incredible saloon. Although the latest C-Class's rear-wheel-drive chassis sets the class standard, it needs beefing up to be able to handle what is nearly double the horsepower output. Another reason is the additional 35kg in the nose - a legacy of the larger engine. To rebalance the Mercedes, Brabus has developed 30mm lower sport springs and used Sachs dampers and thicker anti-roll bars. Combined with the new front spoiler and rear valance, the lower ride height means that the CV8 boasts unerring stability at speed.

The massive increase in power and torque require more powerful brakes. The Brabus/Alcon items have huge discs and calipers, and they look gorgeous when seen through the spokes of the three-piece Brabus alloys with their 235/35ZR19 and 265/30ZR19 Michelin tyres. The CV8 rides firmly at low speeds, but when you increase the pace those uprated springs and dampers start to earn their keep, taking the edge off bumps and maintaining iron-fisted body control. Stability is particularly impressive when you flick the car through an S-bend at speed.

One of the things you can do easily in a relatively light car with a torquey V8 motor is burn rubber. With the ESP switched off, the CV8 lights up its back tyres with abandon, leaving a cloud of expensive burning rubber in the air as it rockets off into the distance. On a new handling circuit near the Brabus workshop, we were easily able to flick the car's tail out with a stab on the throttle pedal, then hold on to some spectacular power slides.

The interior gets the unique Brabus leather treatment on the seats and door panels, while other additions include a recalibrated speedo which reads up to 200mph for UK versions! The CV8 continues the lineage of Brabus pocket battleships; compact Mercedes with oversized engines. It looks and feels like a factory car rather than a modified one. Considering that a basic CV8 costs from