Vauxhall is the first to admit that the VX220 hasn't been the success it had hoped. Despite having striking looks, supercar performance and fantastic handling, the roadster never caught the attention of buyers seeking excitement and fun. 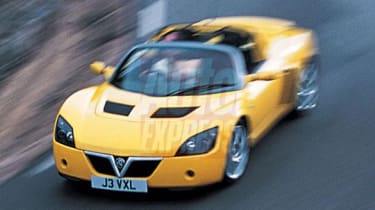 Revisions to the VX have tried to cover two different areas - and they're a success. The turbo gives extra performance and provides real driving pleasure, while the suspension tweaks have improved refinement without affecting the great cornering. Meanwhile, more sound-proofing and luxuries mean long journeys aren't so tiresome.

Vauxhall is the first to admit that the VX220 hasn't been the success it had hoped. Despite having striking looks, supercar performance and fantastic handling, the roadster never caught the attention of buyers seeking excitement and fun.

So the Luton firm has come up with a new way to attract their attention - a turbo. Out goes the old normally aspirated 2.2-litre engine, to be replaced by the Astra GSi's 200bhp 2.0-litre. In a car as light as the alloy-chassised VX, it should certainly be entertaining. We grabbed the keys to find out for sure.

The new engine has added a bit of weight, and the VX Turbo now tips the scales at 920kg - but because of the greater increase in output, performance figures still tumble. The 0-60mph time has dropped from 5.6 to 4.7 seconds, meaning the car can outrun such exotica as the Porsche 911. In an executive saloon, this would feel super-fast, but from the low-slung driver's seat of a VX, it seems like the speed of light.

The chassis is more than capable of handling the 55bhp power increase over the previous car's 145bhp output - after all, it was developed by Lotus. But what is very different about the VX Turbo compared to its naturally aspirated brother is that the suspension no longer crashes and bangs over bumpy roads. Track day fans will probably prefer the harsher set-up of the original, but for the remaining 90 per cent of buyers, the changes to ride comfort will be greatly appreciated. It's gone the same way inside, with the cabin getting a more refined feel. The driver now has a shift indicator that lights up when it's time to change gear, while revised instruments with silver backgrounds and different lettering sit in front of the steering wheel. There's a proper fuel gauge, instead of the inaccurate digital readout used previously, along with full carpeting and additional noise insulation as part of a Touring Pack option. Sadly, some of the complaints about the old car - namely wind noise from the A-pillar and the poor ventilation system - haven't been addressed.

There are still plenty of thrills to be had, though. The Vauxhall has beautifully direct steering, which doesn't need power assistance and therefore offers incredible feedback. The car is set up to be on the safe side for the road, so pushing hard results in nothing more than gentle, controllable understeer - as was the case with the last model.

But the turbo has the ability to kick the tail out if you plant the throttle to the floor, and it can catch out the inexperienced - just ask the six journalists on the launch who brought their test cars back in several pieces on tow trucks. With a sticker price of £25,495, the turbocharged version of the VX220 now sees itself rubbing shoulders with some very serious rivals. Yet despite this stiff competition and a few minor grumbles, it's still truly worthy of respect - and that's purely based on the experience behind the wheel.

It's a shame, then, that the badge is likely to put some people off. If this car was a Lotus or a Porsche, there would be a waiting list stretching into 2004. With an expected production figure of around only 500 a year, the turbocharged two-seater is guaranteed to be a rare sight on the roads. Anyone who loves a real sports car should put their prejudices to one side and seriously consider the VX220 Turbo.