There was a time when a small car with a three-figure power output could be considered a hot hatch. The Peugeot 205 GTi, for example, mustered a mere 115bhp from its 1.6-litre engine. 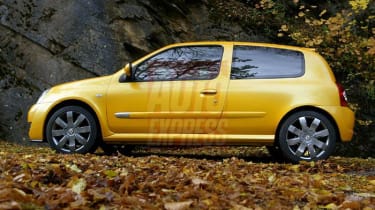 The sportiest model in the Clio range has been revised, but without losing any of the magic that gave its predecessor such appeal. The Clio might be starting to look dated, but in this guise it remains one of the finest hot hatches that money can buy. Both the engine and suspension changes are worthwhile.

There was a time when a small car with a three-figure power output could be considered a hot hatch. The Peugeot 205 GTi, for example, mustered a mere 115bhp from its 1.6-litre engine.

But times have changed. Today, a 115bhp 1.6 is considered normal, and hot hatches are punchier than ever in their quest for improved performance. When the Renaultsport Clio 172 debuted in 2000, it was regarded as the Clio Williams' spiritual successor.

Its 172bhp was phenomenal for such a small car, and coupled to its entertaining handling and snappy short-ratio transmission, it was a driver's delight. For a while, the Clio was untouchable, but with models such as the MINI Cooper S Works and Peugeot 205 GTi 180 upping the ante and offering more than 180bhp, Renault has drafted in an extra 10 horses to keep the sporty Clio on the pace.

The power increase coincides with changes to the whole Clio range - not so much a facelift, as a tidy-up to keep it competitive until an all-new model appears late next year. Visual differences are limited, but are more noticeable on the 182. Fresh bumpers and a slightly different nose distinguish the new version, while the Sport gets exclusive graphite grey alloy wheels and twin chromed exhaust pipes.

Inside, the racy theme continues. The seats are covered in grey perforated Alcantara, with colour-coded belts, and are among the most comfortable and supportive of any performance car, let alone a souped-up supermini. The 182 also gets revised instruments with a new digital display located between the conventional dials.

The big news is under the bonnet. Using the original Clio 172's engine as a basis, Renault's engineers have modified the exhaust manifold to improve gas flow, allowing more efficient cylinder operation. Fuel-injection changes and a slightly different crank profile have also contributed to the power increase.

This is readily noticeable on the road. Although not hugely quicker than the car it replaces, the 182 has a smoother and more linear power delivery, and it's much easier to maintain traction while pulling away quickly. Meanwhile, the suspension has been altered to give better comfort, without affecting the Clio's legendary handling. The ride is less fidgety over bumpy surfaces, too, largely due to a longer wheelbase and wider track. Increased spring and damper rates give firmer suspension, and the set-up is further enhanced by stiffer anti-roll bars. The car also sits 20mm lower than the current machine. The result is awe-inspiring grip, and a chassis which can be exploited by even the most average of drivers.

Push the Clio 182 hard, and you will soon see it's a force to be reckoned with. It still offers a heady mix of performance and balance that can shame many a 'proper' sports car - yet at the same time it's as useful as any standard Clio hatchback when it comes to getting the shopping in.