Meet TVR's extreme machine. The new beast from Blackpool is described by the firm as a race winner in road trim. Christened the Sagaris, it's claimed to be one of the company's ultimate road cars, and a highly evolved version of TVR's entry-level T350C. 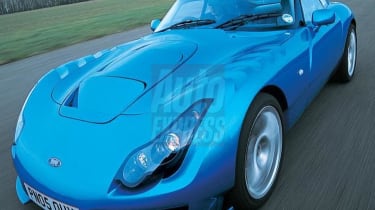 While the Sagaris is the second "new" TVR to be launched by the Russian management, it harks back to the firm's past. Raw and unpolished, the car isn't advanced as the Tuscan 2 - but unique looks and a keen price give it plenty of appeal. Unlikely to stand close comparison with more refined rivals, this is a machine for drivers who put thrills above all else.

Meet TVR's extreme machine. The new beast from Blackpool is described by the firm as a race winner in road trim. Christened the Sagaris, it's claimed to be one of the company's ultimate road cars, and a highly evolved version of TVR's entry-level T350C.

The newcomer takes inspiration from limited-edition specials such as BMW's M3 CSL, and will rival Porsche's forthcoming Cayman. It will cost £49,995.

Powered by a 406bhp 4.0-litre six-cylinder engine, it's 50mm wider and 25mm lower than the car it's based on. In addition, every body panel is unique, shaped to control airflow and improve the aerodynamics. But as exciting as it is to open the driver's door, it's worth remembering that getting behind the wheel of this car has taken some time. The Sagaris was unveiled in November 2003, and production was due to start in 2004. However, before any models left the factory, TVR passed from Peter Wheeler to Russian billionaire Nikolai Smolenski, and the project was delayed as extra development took place.

It's the second car to be launched by the new management, and after testing the Tuscan 2, the best-finished TVR we have ever driven, expectation was high. There's no doubt the Sagaris is dramatic, and with its asymmetrical styling (the roof over the driver's side of the cockpit is raised to make room for a crash helmet) it's a truly unique piece of design.

Exhausts exit at right angles to the body and are protected by the fibreglass panels. Even at idle, the boom they emit is one of the loudest we've ever heard from a production car, and as you accelerate it only gets more intense.

Throttle response is sharp, and with only two turns from lock-to-lock, so is the power-assisted steering. The ride is firm, but still forgiving, and if you are careful with the controls, smooth and gentle progress is possible.

But make no mistake, the Sagaris is not for the faint-hearted. The engine is rough and, at idle, you can hear every twist of the twin-overhead cams. At low revs, the unit chugs as it hunts for torque, making for uneven driving in slow traffic.

The wider track means the turning circle is reduced, and the car is a challenge in town. The low ride height makes it easy to clout speed bumps with the front chin spoiler. On the open road, though, the TVR is far more at home, eagerly climbing through the rev range and proving rewarding to drive. But it's still rough around the edges: the ride can sometimes be jarring and there are all manner of unidentifiable squeaks. Small niggles also persist. For example, the LED lighting used to illuminate the major controls is dazzling at night.

We didn't put the Sagaris through a full test, but the claimed 0-100mph time of 8.1 seconds would only be achievable with some expert driving and a lot of practice. There's minimal rear end grip, and while gearshifts are smooth and swift, the throttle needs to be used carefully to get the best from the engine.

Crucially, though, the TVR is fast and looks wild. From behind the wheel it's an amazing car; there are few other places adrenaline junkies would rather be.