Forget Chevrolets, Thunderbirds and Mustangs; anyone who watched television back in the Eighties will tell you that America's most famous automobile is the Dodge Charger... 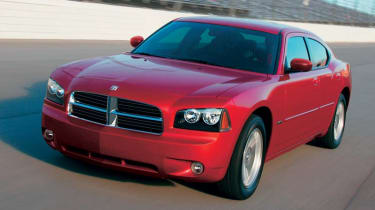 With great looks, punchy performance and around 21mpg, the five-seat Charger offers bags of US appeal. It would make a fine flagship for Dodge's UK introduction, even in left-hand-drive form. But those who want to own a thoroughly American saloon will have to opt for Chrysler's 300C instead, which arrives in Britain this autumn.

Forget Chevrolets, Thunderbirds and Mustangs; anyone who watched television back in the Eighties will tell you that America's most famous automobile is the Dodge Charger...

Star of cult series the Dukes of Hazzard, and painted bright orange with a Confederate flag on the roof, the 1969 two-door General Lee roared its way into the living rooms of millions, and gave the UK an unforgettable taste of American muscle cars. The question is, can Dodge do it again in 2005?

The early indications are not good. Launched at this year's Detroit Motor Show, the brand new Charger is not a two-door like the vehicle of the same name that thrashed around on TV in the early Eighties. Instead, it is a reinvention of sister firm Chrysler's 300C, on which the Charger is based.

Even so, the gentle rise of its C-pillar and its snarling nose are reminiscent of the superstar car. Reassuringly, this motor never fails to turn heads. Atidle, the 5.7-litre V8 HEMI engine sucks in enthusiasts at the same spectacular rate as it guzzles unleaded petrol, and pumps out a throaty roar that makes the £16,406 American price seem like a joke to buyers in the UK.

Acceleration is impressive, partic-ularly from the 340bhp R/T edition which we got behind the wheel of. It is also worth noting that an entry-level 250bhp V6 model is available too, with a bargain price tag in the US of the equivalent of £12,576. This base variant is a joy to drive... until you have sampled the V8.

The noise only gets better if you opt for the £17,776 Daytona. This current flagship version appropriately gets the loudest paintjobs available in America, namely GoManGo! orange, Top Banana yellow and the self-descriptive SubLime. On the road, however, the Charger's long wheelbase and overly light steering bring back memories of the Seventies. This is no sports car, despite the straight-line muscle on offer.

Perhaps all the finely tuned suspension settings are being held in reserve for the 425bhp SRT8, which we have yet to drive. But even the R/T model, equipped with a 'performance package' of stiffer roll bars, feels floaty and lacking in body control.

While Dodge-branded vehicles are set to arrive in the UK early next year, the Charger will be produced in left-hand-drive form only, which is likely to limit its British appeal. That said, if bosses change their mind, we would expect buyers to be Charging into dealerships demanding a test drive...