Everybody has to grow up one day, even boy-racers. But what can they turn to when their Subaru Impreza STi has lost its appeal and the run to the rally stage has been replaced by a drive to Mothercare? 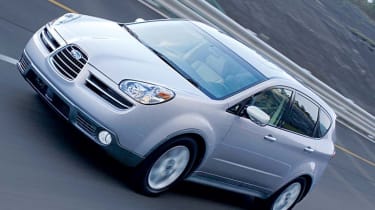 The Tribeca is an SUV with handling that matches its performance. However, questionable styling and interior plastics could harm its chances when it goes on sale here in late 2006.

Everybody has to grow up one day, even boy-racers. But what can they turn to when their Subaru Impreza STi has lost its appeal and the run to the rally stage has been replaced by a drive to Mothercare?

Subaru says its Tribeca SUV is the answer. It is already on sale in the US, where it competes with BMW's X5, Nissan's Murano and Volvo's XC90. It has not been developed as the ultimate off-roader, but Subaru claims its handling on tarmac will be second to none.

We tried the Tribeca on some twisty US roads and came away impressed. This is not an SUV that lumbers from corner to corner with huge amounts of body roll and lifeless steering. Instead, the chassis remains composed, and it is closer in feel to an X5 than an XC90. The traditional Subaru driving spirit definitely shines through.

Sadly, you can hear little of the usual Subaru boxer engine note, even though a flat-six powerplant lies under the bonnet. There is no manual gearbox available, but the five-speed automatic copes well and performance is lively, thanks to the car's 241bhp and 297Nm of torque. To do well in this sector, however, Subaru needs a diesel alternative - and while the Japanese company is developing an oil-burning powerplant, it is not expected for some months.

There are other problems. The interior may be better than in any Subaru we have seen before, but its plasticky feel is hardly going to have designers at Volvo or BMW worried. Nor is the new Subaru family look likely to give rival stylists sleepless nights.

The driving position is not perfectas the steering adjusts for reach only, but the cabin is roomy. Five and seven-seat versions will be available, with UK prices starting at around £30,000.

While the Tribeca seems unlikely to tempt BMW X5 buyers, it could woo mellowing Impreza WRX STi drivers and other ageing fans of hot hatches.