With an elegantly executed exterior and a spacious, refined cabin, Fiat's Linea is sure to be a hit. 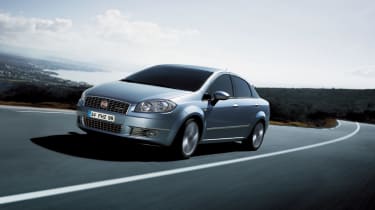 The new Linea should have no problem generating the sales that Fiat is hoping for. With an elegantly executed exterior and a spacious, refined cabin, it is sure to be a hit. The great ride in particular stands out. Only the noisy and slightly breathless diesel lets the package down. The company says it has no plans to bring this car to the UK. However, with right-hand-drive production due to start at Fiat's Indian plants in 2008, don't be surprised if range-topping Lineas turn up in a showroom near you within the next few years.

Take a top-selling hatchback, give it four doors and a boot, and you've got a car with a dash of extra class. Or that's what Fiat hopes with its new Grande Punto-based Linea.

Despite the fact that hatchback-derived saloons don't tend to sell particularly strongly in the UK, there's no doubt that this is an important new car for Fiat. The Italian brand believes that, on a global basis, it will be its second biggest seller behind the Grande Punto.

First impressions are good. Unlike other small saloons, the Linea has elegant proportions, with a curved rear window and stubby bootlid. There's plenty of space inside, which is largely thanks to a wheelbase that's been extended from 2,510mm to 2,603mm. Passengers benefit from the increase in length between the wheels, and there's lots of legroom. What's more, baggage is well catered for as well, thanks to an enormous 500-litre boot.

From behind the wheel, the view is likely to be familiar to owners of the Grande Punto, as nearly everything has been lifted straight from the supermini. The neat dashboard is identical, although unfortunately so are some of the more brittle plastics.

This erodes some of Fiat's efforts to move the model upmarket, even if softer and more luxurious seat trim does help give the four-door a higher-quality ambience than the supermini. Under the bonnet, there's a strong engine line-up, which will initially comprise one diesel and a pair of petrol powerplants. The most popular unit is expected to be the 1.3-litre Multijet oil-burner. It's torquey, but can become coarse when used hard - although it's extremely economical, and returns 57.6mpg.

Meanwhile, for drivers who want greater performance or refinement, there's the option of a 77bhp 1.4-litre petrol powerplant or a 120bhp turbocharged version of the same unit.

Out on the road, it's clear that the engineers have tuned the chassis for comfort. The ride is superb, and the suspension dealt with the rutted tarmac of our test route with ease.

The supple springs also help to keep road noise to a minimum. Add in thick glass that limits wind noise, plus comfortable seats, and the Linea makes for an excellent long-distance cruiser. However, the softer set-up does mean there's a fair bit of body roll in the corners. We weren't keen on the overly light steering, either.

Even so, the new car does offer practical transport, while at £13,500, it represents reasonable value for money, too. Perhaps small saloons could sell in Britain after all!