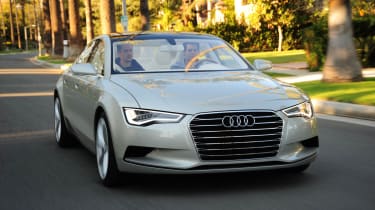 There's no stopping Audi's product onslaught! The German firm is filling any gaps in its line-up with some highly desirable models - and this Sportback, or A7 it will be known, is one of the most prized yet. It's much better looking than BMW's 5-Series GT and if this elegant and beautifully packaged concept car is anything to go by, it promises to be just as practical and as luxurious. With a debut scheduled for the Paris Motor Show next September, all eyes will certainly be on Audi's stand at the French expo.

Taking the German firm into a new area of the luxury market when it goes on sale toward the end of 2010, the Sportback is essentially a rival to the Mercedes CLS, BMW 5-Series GT and the Porsche Panamera.

It'll be badged A7 when it reaches showrooms, sitting between the A6 and recently revealed all-new A8, offering space inside for four or more occupants, the style of a coupe but with a practical hatchback tailgate.

Unlike e-tron, which debuted at this year's Frankfurt Motor Show, the Sportback is very much designed for the stand rather than the road. While it has a production-ready super-clean 222bhp 3.0-litre V6 TDI diesel engine, which emits just 156g/km of CO2, and a seven-speed DSG gearbox, it's unrefined, rattly and only capable of moving very slowly indeed. But the fact is that it's not meant to show off the A7's dynamics but the way it will look, both inside and out.

According to engineers in charge of the project, the Sportback is very close to how the final A7 will look - and our spy shots back this up. Expect the car to be a little higher when it reaches showrooms, but it'll get the same sweeping profile, elegant proportions and beautiful A5-coupe inspired tail.

Details such as the new, more sporty single frame grille, LED headlights and tailights will be carried over too.

While it's certainly good looking, it's practical as well with plenty of room in the back for two lanky six-footers and a vast boot that can hold up to 500 litres of luggage. While this concept gets a single piece tailgate, final production cars could boast a Skoda Superb-style twin-door hatch, and there's also the chance that a three-seater rear bench will be available as an option.

Inside there's a real sense of occasion. Soft cream leather mixes with sandwiched oak trim for a real luxury yacht feel, while the classy dashboard borrows much from the new A8. Expect the finished car to get Audi's updated MMI system, including a touch-sensitive pad that can be used to control navigation functions along with a larger LCD screen and ambient lighting.

While the Sportback's full-length glass roof won't be carried over in its entirety, a shorter panoramic roof will, complete with darkened glass.

Expect the finished A7 to handle and ride very well indeed thanks to an A6-derived platform with five-link front suspension and optional magnetic dampers on some models. Engines will be shared with the new A8, so expect this new 3.0-litre TDI diesel plus a 4.2-litre FSI petrol V8 and a new 4.2-litre diesel offering CO2 emissions of 199g/km and 800Nm of torque. There's also room for a high performance S7 as well as the choice of two-wheel drive and quattro four-wheel drive powertrains. And the price? Given its luxury status, expect the range to kick off around £45,000. For that, buyers will be getting one of the most stylish luxury cars on the road.

BMW 5-Series GT Launched earlier this year, the GT added another dimension to the 5-Series line-up. Offering ample room in the back and a vast boot with twin-opening tailgate, it might not be the best-looking model in the line-up, but it's certainly a practical and desirable machine. The A7 will have to be very good to beat it.