Ask someone what they think of the latest addition to our long-term fleet and one thing's for sure - they will have a strong view, one way or the other. 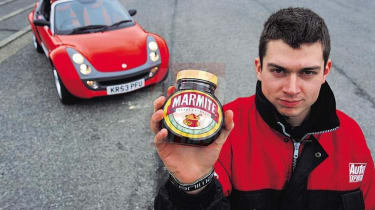 Ask someone what they think of the latest addition to our long-term fleet and one thing's for sure - they will have a strong view, one way or the other. Nothing divides opinion like the Smart Roadster - save for your love or otherwise of Marmite maybe!

For some, the styling is weird, while others see it as a breath of fresh air. It hasn't been with us for long, but the Smart is making a big impression. Having reluctantly handed back the keys to our City Cabrio long termer last year, it'll be interesting to see how we cope with this less practical model.

We kept our Roadster true to the 'fun on a budget' philosophy and tried to exercise restraint when choosing our specification - but this was harder than expected. In the end, we settled for the £655 Sport pack, which included steering wheel paddleshifters and 16-inch alloys, plus a £95 speaker upgrade, £595 air-con and a silver finish to the Tridion safety cell, at a surprising £170. The total comes to £15,028 - a mere £28 over our target.

If our initial responses are anything to go by, this looks like money well spent. The three-spoke wheels are striking, while the Smart's tiny size never fails to raise a comment. Inside, there's space for two, but luggage is less easily accommodated, with a shallow boot and an oddly shaped front compartment. While it's amazing what you can squeeze in up front, I'm sure the lack of load space will cause furrowed brows sooner or later.

Swift Since its arrival in January, the two-seater has been used for commuting and has racked up more than 2,700 miles. The first 1,000 were a chore due to the running-in period, but the 698cc three-cylinder turbocharged powerplant is now singing away to its red line, providing performance that's surprisingly swift. Economy has fallen short of the maker's claimed 55mpg, but our 39.4mpg average is very good given that the Smart has hardly strayed from city streets. The only drawback is that it needs 98-octane fuel, which pushes up the running costs on what's intended to be a budget sports car.

Unfortunately, the six-speed sequential gearbox is testing the patience of some drivers. The transmission makes the Roadster sluggish when pulling away from a standstill and lacks sensitivity in reverse. However, once on the move downchanges are smoothed out with a crafty blip of the throttle.

It's clear the Roadster is at its best on a twisty B-road, where the well weighted steering and sharp turn-in allow you to take advantage of its fantastic handling. Unfortunately, the firm suspension means potholes and broken surfaces ruin the ride, and it's not much better on the motorway, with wind noise at 70mph taking the pleasure out of long trips.

The harsh ride and poor insulation aren't our only complaints. The standard of the interior leaves a lot to be desired and the sound of cheap plastics squeaking as they rub together is irritating, especially as this is not something we had to put up with on the cheaper City Coup