Let your heart rule your head with Alfa's 156 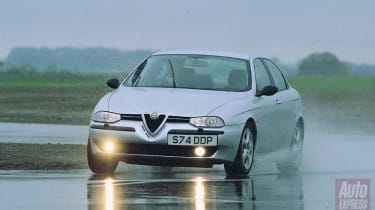 Have you ever thought about buying a used Alfa Romeo, but been afraid to let your heart rule your head? There are few more evocative marques, although the majority of sales in Britain have always been to enthusiasts.

Then the 156 came along to change all that with its gorgeous looks, immense driver appeal and creditable practicality to win over a completely new breed of motorists from BMW to Ford Mondeo owners. So could it be the right car for you now?

Driving You expect a driver's treat to be served up by any Alfa and the 156 does not disappoint, being one of the few modern cars that is blessed with any real character. The handling is excellent thanks to BMW-like poise and super-sharp steering. But just as importantly, the 156 is easy and satisfying to drive when you are not in the mood for thrills. It's not as relaxing as a 3-Series on long trips, because of a rigid ride (it's worse on models with sport suspension) and more noise, but it's not tiring, either.

All models perform well. The 144bhp 1.8 and 155bhp 2.0-litre Twin Spark 16-valve engines (so called because they use two spark plugs per cylinder) are the most popular, thanks to their economy of around 33mpg and reasonable insurance costs. The 2.0 is the best all-rounder. It's that bit beefier mid-range just where you need it, especially in its later 166bhp tune, but don't ignore the 1.6 that was introduced in 2000 if low running costs are a priority. Its 120bhp doesn't suggest how eager this unit feels, admittedly helped by low yet not over-fussy gearing.

Real performance only comes from the 190bhp 2.5-litre V6, an absolute gem of an engine, but the big surprise is the diesel. This unit, which is also used by Fiat's Marea, is one of the lustiest oil-burners on the block, blitzing the V6 for torque, if not refinement. A healthy 136bhp enables it to be as quick as a 1.8 TS, but returning nearly 45mpg.

As well as the slick five-speed manual, there's the choice of a Formula One-style push-button semi-auto Selespeed option, but this is only available for the 2.0 TS. It's a great system in principle and even blips the throttle on downchanges, but is proving to be unreliable. The other option, for V6-engined models only, is the Q-System. This more conventional automatic gearbox also has a manual shift facility.

Living with The 156 is one of Alfa's most practical designs yet. Naturally, there's a hint of quirkiness about the interior, but overall it's user- friendly, fairly solid and stylish. Thankfully, unlike many earlier Alfa Romeos, the driving position is pretty much spot-on and the car is as comfortable as any prestigious German rival.

Rear seat space is only average, however, and the boot can just about accommodate family loads. And unbelievable though it might seem, the Sportwagon estate is actually slightly less spacious than the saloon with the back seats in use. The rakish rear means it can't carry boxy loads, either, though it's no worse than a BMW 3-Series Touring.

The 156 does not have BMW-like build quality, but it's a quantum leap compared with the old 155 and 145 ranges and there's an impressive feeling about the cabin. The basic model (now called Turismo) has nearly everything you need, including air-con and, on most, a lovely wood rim steering wheel. However, the optional Lusso trim pack is the most desirable. Depending on model, it adds headlamp washers, a third centre head restraint, climate control, a CD player and choice of velour or leather trim. The Veloce alternative includes a dubious bodykit, fatter alloys, sports suspension and carbon-effect interior detailing.

For model year 2000, the trim levels were improved, with revised Lusso and Veloce packs becoming models in their own right, but still with the choice of Recaro seats and leather trim.

Buying and owning As rising sales prove, more and more motorists no longer regard owning an Alfa as a gamble. Although some traditional niggles remain, second-hand 156s are holding up pretty well.

Be careful where and what you buy, though. It's best to purchase from a main dealer or one of the many specialists who love the marque. The Alfa Approved 12-month all-component dealer warranty is adequate, but lacks the safety net of rivals by not providing cover for ancillary items such as catalytic converters. Is the car an authentic UK-supplied motor? The 156 is one of the most popular of EU imports because they are easy to source to UK specification. Look for a '.com' name on the number plate and a foreign stamped service history book as clues and check the car thoroughly. It should be a fair bit cheaper, too, by �1,000 on average.

The value for money of imported 156s can't be ignored and you should price any nearly- new UK buy against the brand new deals available overseas or at car supersites. As depreciation wipes out around two-thirds of an Alfa's value after three years, it's a good way of clawing some money back from the outset.

Great looking, fine to drive and top value, the 156 is worth serious thought for those after a sports saloon which can cater for family needs. As well as being a cheaper, more individual alternative to a BMW 3-Series, Audi A4 or Mercedes C-Class, it's also an excellent choice for Mondeo owners wanting to move up to something more prestigious for the same budget. And although you don't need to be a car enthusiast to enjoy this practical and sensible Alfa, it still helps.