In a class dominated by German cars, the big Brit is an alternative choice. What are its good and bad points? 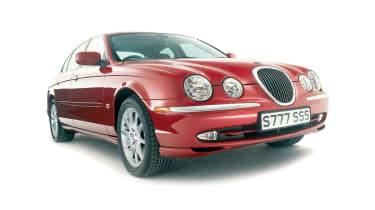 Want to make a grand entrance? There are few better ways of doing it than in a Jaguar. And when it comes to value for money from the Coventry-based manufacturer, the S-Type is just about unbeatable.

Second-hand prices for the exec­utive saloon start from a few thousand pounds – you would pay the same for a tidy Ford Mondeo. But while the S-Type can be picked up cheaply, you need to get a good one, otherwise running costs could drastically undermine your decision. Follow our guide to make sure the object of your neighbours’ envy doesn’t break the bank.

What to look for Don’t be put off by the 2.5-litre engine. It may be the entry-level unit, but it’s powerful enough for most drivers. The 3.0-litre offers greater performance, while the V8 models are smooth and torquey. But if you can live with V8 fuel bills, you can probably afford the superior diesel.

If you’re expecting heaps of boot space from such a large car, you’ll be disappointed – the modest 400-litre luggage bay is awkwardly shaped.

Checklist Engines: V8 cars built before 2000 can suffer from cylinder bore wear. Once the tough coating has eroded, the engine can self-destruct. It will usually run badly first.

Gearbox: even good autos can be jerky and have been known to fail after only 60,000 miles. Manual cars are cheaper and more robust, and thus well worth considering.

Bootlids: seals can fail, letting water leak into the luggage bay – where it wreaks havoc with the electrics. So look out for dampness. Battery is in the boot as well.

Alternatives There are plenty of rival executive saloons available, but you will have to splash out more for most of them compared with the S-Type. However, the Audi A6, BMW 5-Series and Mercedes E-Class all come with practical estate variants – unlike the Jaguar – and they’re sharper to drive, too. The German trio also each offer a wider choice of diesel powerplants.

Closer in price to the big cat are rivals like the Volvo S60 and Saab’s 9-5. They’re both safe, refined and comfortable choices, but just can’t hold a candle to the Jag’s image.

Reader review Richard Slim from Gloucester has owned his 2003 S-Type 2.5 V6 from new, but his experiences haven’t all been positive. “Reliability has been patchy and the car is pricey to run, with high servicing costs,” he said. “But my main bugbear is the inefficient and unhelpful dealer network.

“Still, for such a big car it’s surprisingly economical – I can get 33mpg on a run. It’s comfortable, with great ventilation and a superb engine that makes it relaxing to drive.”

Do your homework properly and the S-Type could be a bargain, but cut corners and you may find out the hard (and costly) way why the previous owner moved on. Electrical woes are common and tricky to fix.

There’s an all-new car, the XF, coming next year. Yet if you’re not concerned about having the latest looks, a good S-Type offers incredible comfort and kudos for the money.

Oct 2000: front seatbelt buckles can fail on cars built from the start of May to the end of July 2000.Nov 2000: front lower suspension ball joint may fail on models produced between the start of January 1999 and end of September 2000.Mar 2004: automatic gearbox may engage reverse when in drive on self-shifters built between the start of July 2001 and the end of June 2003.Oct 2004: speed restriction label on the space-saver spare wheel may fall off on models produced during March 2004.Oct 2004: electronic parking brake may apply itself unintentionally on S-Types built between 11 November 2002 and 22 December 2003.Nov 2005: auto box parking brake may not full engage on cars made in August and September 2005.