It’s showing its age, but Ka still has plenty of tricks up its sleeve 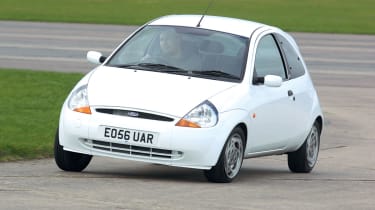 It’s hard to believe, but the Ford Ka celebrates its 11th birthday this year. In the late Nineties, this was the model on which blue oval bosses pinned all their hopes. And it certainly didn’t disappoint – it has proved to be a popular seller every year since its launch.

Despite its age, it looks as fresh today as it ever has. When it comes to timeless design, the baby Ford is an example of how to get it right. Well proportioned, youthful and with a classic wheel-at-each-corner layout, the Ka has a distinctive profile. With so many on the road, it’s easy to forget what a good-looking machine it is. The Frozen White paintwork of our test model – with its colour-coded bumpers – might not be to everyone’s taste, but the unusual Star design alloy wheels certainly make it stand out.

It has the lowest roof height of the four models in this test, yet there is very little evidence to suggest that inside. Rear head and leg space is fine, considering the car’s short dimensions. And although you can only fit two people in the back, the seats are comfortable – it certainly feels more spacious than the Satria.

The driving position is good, too, and the cabin is roomy up front. Admittedly, the painted metal on the doors reminds you that you’re in a budget supermini, but the rest of the interior is durable and well built. The chunky stereo and heater controls are robust, while the leather steering wheel is great to hold and adds a sporty touch. And although the dash plastics are rather brittle, the Ka’s design flair gives it character that’s absent from the Proton and Hyundai.

The peppy 1.3-litre Duratec engine has the least power and torque here, but it rarely feels breathless, as it has been tuned for low-rev response. As a result, the Ford is great around town and for nipping in and out of traffic, yet there’s no hiding the fact that its performance was off the pace.

The Ka took 13.5 seconds to sprint from 0-60mph – more than three-and-a-half seconds behind the Swift. It had by far the worst 30-70mph time, at 14.8 seconds, and was slower during our in-gear tests, with 50-70mph in top taking a lengthy 18.1 seconds. It’s the lightest car here, though, weighing less than 1,000kg, and that paid dividends under braking – the Ford had the shortest stopping distances from all speeds, and was the most surefooted, too.

Yet while it isn’t as quick as its rivals, the Ka more than compensates for its lack of grunt when it comes to handling. The balanced chassis and short overhangs mean the Ford feels agile, and even when thrown into a bend it copes well, with minimal body roll and high levels of grip.

The steering is precise and there’s superb feedback through the wheel, plus the Ka turns in sharply. Take it out on a twisty back road, and it’s in its element, offering a lively driving experience. The Ford’s ride is firmer than its competitors’, but it deals with rough surfaces equally well.

It’s also great value. With a price tag of £8,595, it’s the cheapest car here, but comes generously equipped with air-conditioning, remote central locking and alloy wheels all fitted as standard. And with a new model in the pipeline, there are sure to be plenty of deals to be had. Buyers opting for the Zetec Climate trim of our test car can currently get a £1,100 discount, bringing the price down to £7,495. The offer includes a Quickclear heated windscreen and electrically adjustable heated door mirrors, too.

The Ka returned a respectable 35.7mpg, yet it was still the thirstiest. The figures fell when the small 1.3-litre engine was subjected to motorway speeds.

Ford’s baby is a popular second-hand buy, but with so many on the road, residuals aren’t very strong. It holds on to 40.8 per cent of its value after three years.

No wonder the Ka is cheap to maintain. The 12,500-mile intervals are the longest here, and a £467 total for three visits to the dealer is competitive.

It has the lowest list price, but the Ka’s petrol engine means it isn’t as cheap as the Getz to run as a company car. It’s still great value, at £321 for lower-band owners.