The Proton Satria Neo is an alternative choice in the supermini market, and sells on its budget price and individual looks 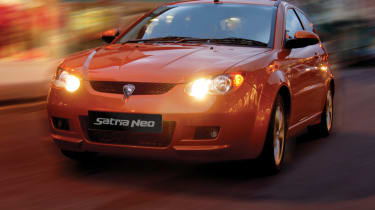 The Proton Satria Neo is a three-door supermini rival to the likes of the Suzuki Swift, Hyundai i20 and Kia Rio, although it feels a long way behind them. It stands out with its budget price, and has a decent level of equipment included as standard. But the smaller, cheaper and higher-quality VW up!, Skoda Citigo and SEAT Mii city cars will provide it with a stiff challenge. The design was conceived by Proton and Lotus, and incorporates a sculpted bonnet, with alloy wheels and a central exhaust hinting at a sporty focus. There’s only one engine option – a 111bhp 1.6-litre petrol four-cylinder – although buyers can pick from manual or automatic gearboxes.

The 111bhp 1.6-litre CamPro engine in the Proton Satria Neo is shared with the larger Gen2 family car, and again was developed by Proton in conjunction with Lotus. It’s mated to a choice of five-speed manual or four-speed automatic gearboxes, but has to be worked hard to make meaningful progress. Doing so generates a sporty sound from the exhaust, although this can become tiring on long journeys. And despite the sporty claims and the Lotus input, the car isn’t especially exciting to drive; it feels a couple of generations behind the class leaders from behind the wheel. Still, it takes a reasonable 11.5 seconds to go from 0-62mph and hits a 118mph top speed.

Despite its compact size, the Proton Satria Neo isn’t especially clean or efficient, especially compared to eco versions of the Kia Rio and Hyundai i20. Its 1.6-litre engine claims 42.8mpg economy and 157g/km CO2 emissions, so fuel and road tax bills won’t be particularly low. And while insurance premiums promise to be competitive, the car isn’t likely to hold on to its value that well. The price looks tempting, but when you compare the equipment included with that of the class leaders – and with the new VW up! city car and its Skoda and SEAT sister models – the Satria Neo doesn’t seem like such a good deal.

With its low stance and flared wheelarches, the Proton Satria Neo looks sporty. The design was a collaboration between Proton and Lotus, and features what Proton calls tiger’s eye headlights. There’s also a rear spoiler and front foglamps, plus 16-inch alloy wheels as standard, while inside is a simple layout, with a three-spoke steering wheel incorporating controls for the stereo. The Blaupunkt system plays MP3-encoded CDs, but can only be specified with Bluetooth as an option. Also featuring on the equipment list are climate control, electric windows and rear parking sensors. Plus, the driver and front passenger seats have a sporty and figure-hugging design.

The rear seat splits and folds to take the 286-litre boot capacity up to a maximum of 615 litres, but the Proton Satria Neo has no neat or clever touches to make the most of the luggage space on offer. Plus, with the back seats in place, passengers don’t have very much room to stretch out in – disappointing considering that the car is longer than other models in this sector. The curving roofline also impacts on rear headroom. The driving position leaves a lot to be desired, too, as the seat can’t be set low enough to suit taller drivers.

Proton sells the Satria Neo with a three-year/60,000-mile manufacturer warranty, while a three-year RAC roadside assistance package is also thrown in as part of the deal, to provide impressive peace of mind. The car hasn’t featured in our Driver Power satisfaction surveys over the years, so reliability is difficult to gauge. It hasn’t been put through the rigorous Euro NCAP crash testing programme, either, and although driver and front passenger airbags are included as standard, more modern rivals come with a much more comprehensive package of safety features. For example, Proton doesn’t even offer stability control as an optional extra. 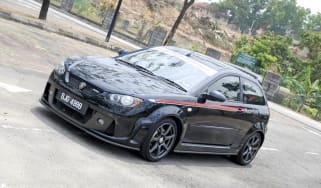 We get the chance to put the hot Proton of tomorrow through its paces.
Superminis 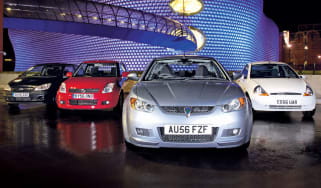 We compare Proton's new Satria Neo with rivals from Suzuki, Hyundai and Ford in its first test...
Skip to HeaderSkip to Content