We get the chance to put the hot Proton of tomorrow through its paces. 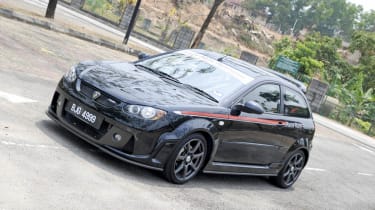 WHILE the Satria Neo R3 may not match performance hatches such as the Vauxhall Corsa VXR, it does represent a cheaper, more driver-focused alternative to the likes of the Suzuki Swift Sport. As with the old Satria GTi, the Proton is still an entertaining car, and does what it’s supposed to do well. But if you want refinement, you should look elsewhere.

It's no secret that Lotus is owned by Proton – and that’s been great news for the Norfolk company’s financial stability. What is harder to work out, though, is exactly what Proton gets out of the relationship.

Apart from the Lotus-developed Campro engine that powers the Gen2 supermini, as well as the occasional special edition such as the respected Satria GTi hot hatch of the Nineties, Proton doesn’t seem to have tapped into its subsidiary’s know-how much.

All that might be about to change, however, and a new performance version of the Satria Neo, the R3, hints at what could be in store for UK drivers.

The model is the result of a close collaboration between the two firms, and can instantly be identified by its over-the-top styling, large rear wing, centrally mounted exhaust and red detailing on black paintwork. Inside, there are Recaro sports seats, plus a short gearlever. The package is completed by a suede-trimmed steering wheel and clear dial displays.

Another modification is the addition of a steering spacer, which brings the wheel closer to the driver. While our car was described as a development prototype, and did without the grooved brake discs and performance pads that will grace the final production version, it featured all the other key ingredients of the R3 package.

The 1.6-litre Campro engine under the bonnet gets new 8mm sparkplug cables, a tuned exhaust system and a remapped ECU. All of this results in 135bhp at 6,100rpm and a torque output of up to 164Nm at 4,200rpm – an impressive return for a twin-cam powerplant of this type.

Sadly, the unit lacks urge low in the rev range – you have to wait until the speed builds to beyond 4,000rpm before anything meaningful happens. Then, it really comes alive, although somewhere beyond the 5,500rpm mark the engine note changes without any prior warning, and suddenly becomes unacceptably loud.

The suspension has been modified, and is a lot firmer than a stock Satria Neo’s. Even so, the influence of Lotus means the ride remains supple. While the car sits lower to the ground, the undercarriage never scraped speed bumps, which is a sign that Proton engineers have paid attention to the newcomer’s versatility.

On winding roads, there’s a decent amount of steering feel and feedback, and the chassis offers plenty of grip. Yet throttle response was not as impressive, with the engine remaining slow to react to driver inputs.

Pushing the Proton up to 100mph on the track was easy, although the minimal soundproofing – combined with the excessive engine noise and firm suspension – means high-speed driving is tiring over long distances.

Clearly, there’s still a lot of work to do before the model makes it to the UK, but there’s no doubt that the Satria marks the beginning of something exciting. So come on, Proton, don’t keep hot hatch fans waiting any longer... Bring the R3 here now!