Blending style and fun, Swift has put Suzuki on the supermini map 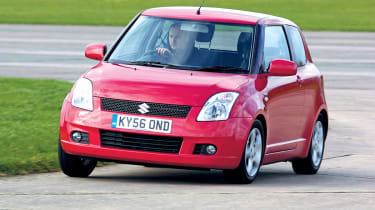 The Swift is one of the most important vehicles ever produced by Suzuki. While the Japanese manufacturer had plenty of success with the Vitara, breaking into the competitive supermini market proved a more elusive goal. But the new Swift, launched two years ago, changed all that and proved the firm was capable of building quality cars.

With modern and cheeky looks, it’s clear the Swift was styled for the European market, evident in the smooth lines and high waistline. It’s ideal for town driving thanks to its small dimensions – it’s only 75mm longer than the Ka, and has the shortest wheelbase here. In our opinion, it’s the best looking of the bunch and certainly the neatest design, making its rivals appear dated.

The tall cabin means that rear passengers get plenty of headroom, on a par with the Getz, while leg space is good, although the front seats arch back towards you. The chairs are the most comfortable on test, and the Swift would be our choice for a longer journey. Access to the back is also the easiest of these three-doors, although as with the Proton, only the front passenger seat slides forward to offer unimpeded access.

The compact dimensions are a little more noticeable in the front. An upright windscreen and A-pillars give you the sense that everything is much closer to you, but it’s preferable to the cramped Proton interior. Visibility is a strong point, and ergonomically the Swift is very good.

As with its rivals, the Suzuki lacks reach-adjustable steering, but thanks to an excellent driving position, that’s not an issue. A multifunction wheel, integrated stereo and quality switchgear belie the Swift’s label as a budget car. The keyless entry and start system is another high-end feature that is unusual in this sector.

This quality feel extends to the excellent 1.5-litre engine. The 100bhp power output won’t grab any headlines, but the unit feels strong, while the precise gearchange is a joy to use. We were even more impressed with the Swift’s pace – it was the quickest car here, completing the 0-60mph sprint in 9.9 seconds. In-gear acceleration was equally good – it couldn’t quite match the torquey diesel Getz, but from 30-70mph through the gears it was peerless, taking 9.6 seconds. The brakes were also positive; a stopping distance of 40.1 metres from 60mph was bettered only by the Ford.

Out on the road, it’s the most enjoyable of these four to drive, as the smooth, free-revving engine picks up happily from 2,500rpm. At cruising speeds, the Suzuki isn’t as stable as the Proton, and side winds can unsettle it, but a 68dB reading at 70mph meant it was the quietest car here.

The other highlight of the Swift is the handling. The suspension easily copes with different road surfaces and shrugs off potholes and bumps.

A short wheelbase helps agility, and although body roll isn’t as well controlled as in the Ka, the steering is responsive and nicely weighted. While it can’t quite match the supermini class leaders, it feels sophisticated in this company and is the most composed through corners. It’s easily manoeuvrable around town, too, and has the smallest turning circle at only 9.4 metres.

The Swift also represents excellent value. At £8,699 for the 1.5 GLX, it’s £896 less than the pricey Proton. And while parking sensors are a £190 option, it does have that keyless entry set-up. Six airbags and a four-star Euro NCAP crash test rating should make it the safest car here, too.

The Suzuki’s 1.5-litre engine is happy to rev, but fuel economy doesn’t suffer much as a result. The Swift returned 39.1mpg, which was only bettered by the diesel Getz.

In terms of retained value, the Swift leads the way, holding on to 43.8 per cent of its price in three years. It’s Suzuki’s best performer after the latest Grand Vitara.

The Suzuki dealer we called was helpful, but as with the Proton, the Swift has 9,000-mile intervals. A total of £495 for three visits is £57 more expensive, too.

Its engine emits 159g/km, but the Swift has a lower list price than the Proton. So although it sits in the same tax bracket, lower-band buyers will pay £36 less.