It’s evolution, not revolution – but is that enough to put the X5 on top? 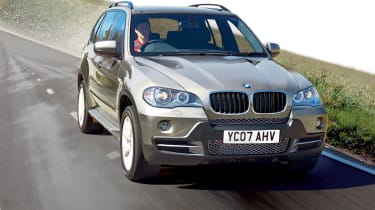 The new X5 is an SAV, not an SUV. So says BMW, which insists its off-roader is a Sports Activity – rather than Utility – Vehicle. This seems like a minor point, but it highlights the fact the German company is targeting a lifestyle audience rather than families alone.

In reality, the firm knows it can’t afford to alienate those who will be filling all the chairs on a regular basis. That’s why the new X5 is 187mm longer and features the option of seven seats – although it’s much shorter than the Q7, and the extra pair of chairs costs £1,320.

That looks poor value when you find out how small, hard and cramped they are. With only 510mm of legroom, adults shouldn’t even try to negotiate their way into the rearmost seats. At least all the handles that tilt and slide the middle row are chunky and easy to use, and the bench provides ample space for three.

The X5 is not only BMW’s first-ever seven-seater, but also boasts the firm’s largest luggage capacity – 1,750 litres with all the chairs folded flat. That sounds good until you learn the Disco’s load bay totals 2,558 litres. In fact, the BMW’s boot is smaller all-round than either rival’s – although people coming from the existing X5 will be impressed that the capacity in five-seat mode has grown from 465 litres to 620 litres.

It doesn’t offer quite the space and flexibility of its opponents, but BMW has done enough to improve matters without making the X5 too big and bulky. In fact, it appears smaller and more athletic than its predecessor, with sharp creases and a more aggressive nose. Externally, it undoubtedly looks more similar to the X3, but there’s no evidence of corner-cutting inside.

The design is a fusion of old X5 and current 5-Series, with an extra splash of user-friendliness. There are plentiful cubbies, a space-saving joystick-style gearlever and electric parking brake, and apart from the confusing iDrive cabin control dial, the switchgear is both legible and logical.

But from behind the chunky wheel, the X5 doesn’t feel that much like an off-roader – it’s luxurious rather than utilitarian, although the superb seats, which give you a commanding view of the road, are welcome.

The 3.0-litre diesel is one of the world’s best oil-burners, and has been tweaked to produce 235bhp and 520Nm of torque. So even though the X5’s weight has climbed by nearly 150kg, it’s far from slow. The six-cylinder unit is eager and more responsive than the Q7’s, as well muffled as the Discovery’s and is linked to a smooth and fast new six-speed auto box.

Even though the X5 has always traded on its performance, it’s good to know that the power is backed up by strong brakes and crisp, involving handling. With a bodyshell that’s five per cent stiffer and double wishbone front suspension, the BMW feels stable in corners and has great poise and traction. It’s nimbler and more wieldy than the Q7 and the ride is improved, too.

Its damping is more absorbent, despite the standard run-flat tyres, yet it doesn’t steamroller bumps nearly as well as the Discovery. Stiff suspension settings mean you’re much more aware of what’s going on underneath the car – good for driver confidence, but not for comfort.

The X5 isn’t cheap (prices have risen by over £3,000), yet that’s justified by the improvements the second-generation model offers.

Price: £40,220Model tested: BMW X5 3.0d SEChart position: 2WHY: The X5 promises more space, and this diesel is expected to claim more than 90 per cent of sales.

An easy winner here, returning 28.9mpg in our hands. Drive gently in the BMW diesel, and you’ll happily top 30mpg – impressive given the X5’s weight, power and performance. It can travel 100 miles further than the Disco between refills.

An early forecast from Glass’s Guide gives the X5 3.0d a residual value of 56.3 per cent. That’s not up to the standard of the Audi, but is excellent – although it’s likely to soften as the new model becomes a more common sight.

Putting out 231g/km of CO2, the BMW is more than 40g/km cleaner than either rival. However, only your conscience will benefit, because the X5 still sits in the top tax band. Don’t go adding too many options, either – they’re taxable.