With dramatic looks and a tremendous engine, the Civic is a real star 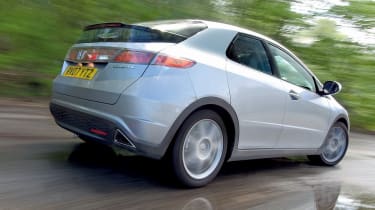 Honda has strong ties with the UK. Its Swindon facility opened 21 years ago, and the firm has invested £1.3 billion so far. But that doesn’t mean the company is afraid to take risks – just compare the new Civic with the old.

The latest incarnation of the hatch has real presence and looks completely different from anything else on the market. Thanks to its concealed rear door handles, even the five-door variant – as tested here – has a coupe appearance, which is further enhanced by the wedge-shape profile. There are plenty of unique design cues such as triangular foglights and exhaust trims – as well as that funky central-glazed light panel – which create a sporty feel.

As with the outside, the interior is a blend of well-thought-out style and practicality. All the controls are focused around the driver, giving the cabin a cockpit-like feel, while the futuristic blue-lit instrument cluster creates a 3D-effect. The most essential controls, such as air-con, are positioned close to the steering wheel – which is a fantastic design idea. The car used in our pictures is an EX model, rather than the SE we tested which does without sat-nav and cruise control.

But as with all the Civic models, the quality of the materials is class leading, largely thanks to the tactile plastics used. Overall, this attention to detail provides a far more sophisticated environment than that of its rivals.

The packaging is by far the cleverest bit. As with the Jazz, the fuel tank now sits under the front chairs, so not only is the rear cabin very spacious, but there is extra storage under the seats. The chairs also fold flat in one motion, or the bases can be lifted up, cinema-style.

Meanwhile, the low-slung driving position is the best on test, while the supportive seats are upholstered in a quality Alcantara-style material.

Once behind the wheel, it’s clear this is very much a driver-orientated car. The precise pedals and steering are light enough for motoring around town but also impressively responsive, and there’s more feel through the wheel than on its rivals.

Corners are dealt with confidently thanks to good grip and minimal body roll, plus the Civic is the most reassuring in the wet. It’s certainly far more involving and fun to drive, and it’s the only car here with stability control as standard.

Equally impressive is the fantastic 2.2-litre i-CTDi engine. The Swindon-built all-aluminium unit was the first oil-burner designed in-house by Honda – it made its debut in the Accord.

Superbly refined, yet punchy, the Civic’s powerplant has the most torque here, and it was no surprise that the car was the quickest at the test track. Even more impressive was that it also returned the best fuel economy figures. Around town, the linear power delivery makes the Civic very relaxing to drive in traffic, but it’s also a delight on country roads where, allied to the accurate six-shift gearbox, it feels eager and quick to respond.

Despite the Honda’s all-round quality and design, it’s not overpriced. It may be the most powerful car here but with a sticker price of £16,155 for the SE model, it’s only £56 more expensive than the Qashqai. You do miss out on certain kit though, as the Honda doesn’t get parking sensors, cruise control or a CD changer – all standard on the Nissan.

Price: £16,155Model tested: Honda Civic 2.2 i-CTDiChart position: 1WHY: The Civic has been a revelation in helping Honda attract younger buyers.

Despite having the biggest engine, the Civic was the most frugal car, returning an average of 37.8mpg. However, it has the smallest fuel tank here. This gives a range of only 416 miles, which is the shortest in this test.

A clear residual winner, the Civic is still worth £8,385 after three years, which equates to 51.9 per cent of its original cost. Only the flagship outperforms our five-door diesel SE: the three-door Type R GT retains 58.6 per cent.

Petrol buyers benefit from Honda’s Happiness fixed-price scheme, but it doesn’t apply to diesel cars. More bad news, as the i-CTDi model is expensive to service – the first three check-ups will set you back more than £700.

The Civic’s 2.2-litre engine is the cleanest here, with emissions of 138g/km. As a result, lower-band owners face an annual tax bill of £640 – choose the Toyota and you will pay £46 more, while the Nissan costs £33 extra.