It’s a radical blend of hatchback and SUV, but does the Qashqai deliver? 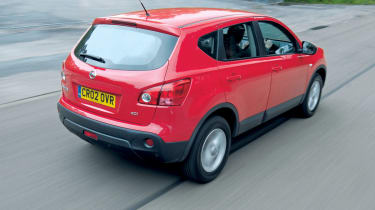 The concept of a crossover is a simple one. Take the agility of a hatchback along with the practicality of an SUV, and combine them in a sporty package. It sounds easy, but isn’t always successful – Dodge’s disappointing Caliber is a case in point.

Nissan is confident the blend will work, though – and why shouldn’t it be? No less than 700 cars are rolling out of the Sunderland factory gates every day, exported as far afield as South America, Australia and even Japan.

The Qashqai certainly stands out well on British roads, with its athletic look. Viewed in profile, it has a similar shape to the larger Murano, which adds to its crossover appearance. However, the striking front, with the prominent Nissan badge and raked headlights, gives it very much its own identity.

The interior isn’t quite as memorable – instead Nissan has opted for a simple layout, which looks a little dull compared with the Civic’s. However, quality is a strong point, as is the finish. We like the steering mounted controls, while the metal inserts on the wheel itself and around the instrument dials give an upmarket feel.

The elevated driving position is certainly reminiscent of an SUV, meaning forward visibility is excellent, although the seats do lack support and on longer journeys it’s not as comfortable as the Civic. Passengers in the rear may feel a little disappointed, too – there’s not as much room as you’d expect, and the transmission tunnel gets in the way if you’re sitting in the middle chair. That said, there’s still more legroom than the Auris, even if headspace isn’t as good.

It’s a shame, then, that the firm hasn’t done anything clever with the rear seats. They feature a standard 60/40 split, but while the backs fold down, the bases don’t flip forward, meaning it’s impossible to create a flat luggage space. Both the Toyota and Honda feature fold-flat systems.

These are minor niggles and once behind the wheel, the Qashqai really starts to impress. With the tall suspension required to give the car its high stance, you’d think the Nissan would struggle through corners, but it handles surprisingly well.

True, the steering does lack a little feel, but it’s direct and turns in precisely. The bodyshell is stiff and the well controlled suspension means that roll is always kept in check. The model may not be quite as agile as the Civic, but it certainly inspires more confidence than the Auris, thanks in part to high levels of grip. Ride quality is also good due to cosseting dampers, and it makes a smooth and quiet motorway companion.

This refined feel is reflected in the 1.5-litre diesel engine. Despite having a smaller capacity than both rivals, it’s seldom sluggish and its lack of torque is only noticeable when pushed hard. It was off the pace at the test track though, the Qashqai taking 11.7 seconds to sprint from 0-60mph, while 30-70mph through the gears was a leisurely 12.3 seconds – one-and-a-half-seconds slower than the Auris. Out on the road, the free-revving engine rarely needs to be worked too hard, and the smooth but responsive power delivery is good for nipping through traffic.

The Nissan is well equipped with Bluetooth, parking sensors, climate control and a CD changer all standard. At £16,099 it’s also the cheapest car here – but it’s important to bear in mind that it does have the smallest engine. An important model for Nissan – it’s good to know the firm has such faith in its British workforce.

None of these cars was as economical as we’d expected. And, with the smallest engine here, even the Qashqai averaged only 37.1mpg. However, its 65-litre tank is bigger than both rivals’, providing the longest range, at 525 miles.

This smaller 1.5 diesel is the better choice for retained values in the Qashqai line-up. Our Acenta model holds on to 47 per cent of its price, so it’s worth £7,581 after three years. Only the entry-level Visia variant does better than that.

While £611 for three Qashqai services is quite cheap, Nissan dealers fell out of favour in our Driver Power 2007 survey. They were voted 26th out of 32, largely down to poor communication. Honda’s garages came second and Toyota’s fourth.

Surprisingly, the Qashqai’s diesel emits 145g/km of CO2 – that’s 7g/km more than the Civic’s larger engine puts into the atmosphere. The Nissan is one tax bracket higher, making it pricier than the Honda for company buyers.