As replacement for the big-selling Corolla, the Auris has a lot to live up to 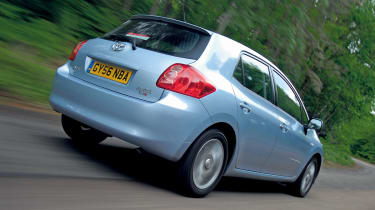 According to Toyota’s marketing spiel, the Auris “is a new name for a new family hatchback”. So the question is: why does it look so similar to the Corolla it replaces? To say the Japanese marque played it safe when penning the new design is an understatement – the outgoing car was hardly individual, and the latest model isn’t that different. That’s a shame given it was designed at ED2, Toyota’s European Design Development Centre.

The fact it’s built in Britain only adds to its European flavour –and 85 per cent of the 150,000 Auris units produced here this year are destined for export. Maybe this explains the safe looks, which are unlikely to win any style awards. The bold Yaris-style nose is appealing but, viewed from most angles, its lack of sharp lines makes it appear less sporty than its predecessor.

Thankfully, a bolder approach has been taken on the cabin. A floating console dominates the centre of the driving environment and means the gearlever and handbrake are positioned high up. Its arching shape is echoed by the door handles, so it’s a surprise the rest of the interior is fairly dull, including the steering wheel and switchgear. We like the instrument dials, which feature a 3D-effect similar to the Civic.

However, as with the rest of the cabin, the execution isn’t quite as slick or modern as in the Honda. Another criticism is the high driving position, and the fact that the seat does not adjust low enough – it also lacks support.

Considering it is shorter than its rivals (and has the smallest wheelbase), it’s no surprise that the Toyota’s boot is small in comparison. It also has the narrowest and shortest loadspace, which is hardly a strong selling point for family buyers.

Luckily, there is better news for passengers in the back. Although the Auris has the least knee clearance – with only 750mm (compared to 790mm in the Qashqai and 800mm in the Civic) – its large windows and high ceiling help to create a feeling of space.

There’s little wrong in terms of the handling, either. Thanks to a stiffer bodyshell than before and a new suspension set-up, the Toyota corners confidently, although roll isn’t kept in check as well as it should be. It’s certainly safe and predictable, if uninspiring. But the biggest disappointment is the lifeless steering doesn’t offer drivers much communication with the road, despite initially feeling well weighted. Along with the lack of feedback from the brake pedal, it makes for a detached driving experience.

The same can be said about the 2.0-litre D-4D engine. With 124bhp and 300Nm of torque, the unit is capable, but it lacks the urgency of the Honda powerplant. It is refined, though, and the slick six-speed gearbox makes motorway trips comfortable. Performance is strong in gear, too, although, not a match for the more powerful Civic. Like the rest of the car, the engine is competent but just doesn’t quite sparkle.

But what the Auris does have on its side is affordability. Thanks to a list price of £15,600, it’s roughly £500 cheaper than either rival and comes competitively equipped. Surprisingly, though, several extras such as satellite navigation, a CD changer and parking sensors are not available on this trim. However, along with the Qashqai, it impresses in terms of safety – both cars have been awarded the maximum five stars in Euro NCAP crash tests.

Price: £15,600Model tested: Toyota Auris 2.0 D-4D T3Chart position: 3WHY: Replacing the Corolla was a daunting task, but look under the skin for the real changes.

By chance, the Auris has the same claimed 52.3mpg figure as the Qashqai. But it was less economical, achieving 36.3mpg over our test route – the lowest of our trio. Its 439-mile range is 86 miles down on the Nissan’s as well.

It’s not only in terms of styling that the Auris falls down – it’s likely to get a poor reception from second-hand buyers, too. A retained value of 45.9 per cent is hardly outstanding. In three years, the Toyota will be worth only £7,160.

As well as the lowest screen price and running costs, the Auris offers the cheapest servicing here, at £565 for the first three visits. But the 10,000-mile intervals are shorter than both rivals’, and the Toyota has only a single-year recovery deal.

Even though it’s the cheapest car to buy, the Toyota is the most expensive to run for fleet owners. The engine emits 151g/km of CO2 – putting the Auris in the 20 per cent tax bracket. Lower-band owners will shell out £686 a year.