Two things clearly differentiate the Outdoor from a normal 207 SW. 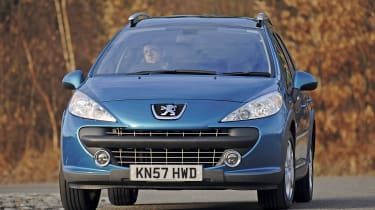 Firstly, it rides higher off the ground by 16mm at the front and 21mm at the rear. Then, there are the chunky off-roader styling cues. The grey mouldings around the wheelarches and along the bottom of the doors and bumpers are very prominent, yet they add a lot of extra lines to the Peugeot’s already fussy profile. The gaping grille isn’t the prettiest sight on the road, either, although the SW’s rear end looks good, with its big, jewel-like tail-lights.

Real thought has gone into the Outdoor’s luggage area, and there are a number of neat touches you would normally only expect to find in larger estate cars. For example, if you want to quickly pop a couple of shopping bags into the boot, you can open the glass on the tailgate without having to bother with the whole hatch.

Loading heavier objects is simple, too; the sill is only 545mm from the ground, compared with 662mm for the Skoda’s. Floor runners and a shallow lip make it easy to push boxes into the boot, while tie hooks and a net mean your cargo won’t slide about. There’s also an extra six litres of storage underneath the false floor.

Folding the Peugeot’s 70/30 split seats is straightforward, as one lever tips the backrest and lowers the base to create a level load area. However, before you can do that, you have to remove the flimsy parcel shelf and ceiling-mounted luggage retaining net. When we took this down, two roof brackets came with it.

Construction Quality issues such as this aren’t confined to the boot. The doors feel tinny as well. So although the 207’s cabin is stylish, it trails the sturdy Skoda cockpit by a long way for construction.

Occupants in the Peugeot are short changed when it comes to space, too. Annoyingly, your clutch foot is jammed up against the transmission tunnel – there’s no rest – and if a six-foot driver sets the front seat to their ideal position, tall rear passengers will find themselves squashed up in the back. There’s not as much head and shoulder room on offer as in the Skoda, either.

Out on the road, the raised suspension hasn’t seriously affected the standard SW’s tidy handling. There is a little more body roll in tight corners, but the Outdoor is still more nimble and involving than the Scout. Badly rutted roads pose less of a problem, too, and the smooth-riding 207 does a good job of keeping its occupants comfortable. The French car also has better front three-quarter visibility, thanks to its narrower A-pillars.

While the 1.6-litre diesel trails the Roomster for capacity, it produces slightly more power. Yet in terms of performance, there’s little to separate this duo. The Peugeot’s engine is more civilised, and at speed, is quieter than the Skoda’s coarse motor. What’s more, the Peugeot returned 43.2mpg in its time with us – around 4mpg better than the Scout’s 39.8mpg figure.

On top of that, the Outdoor isn’t short of equipment. As well as air-con, a trip computer and CD player, it features one-touch powered windows and a full-length panoramic glass roof with an electric blind. Fitting a similar panoramic sunroof and electric rear windows adds £680 to the price of the Skoda, although the Scout does come with electronic stability control as standard. The driver aid is a £350 option on the Peugeot.

Price: £14,710Model tested: Peugeot 207 SW Outdoor 1.6 HDiChart position: 2WHY: The Scout is a funky take on the standard Roomster, but doesn’t lose out on practicality.

There are no predicted values for the Outdoor yet. But owners will have no cause for concern if it holds its price as well as the normal SW. That retains 43.3 per cent over three years.