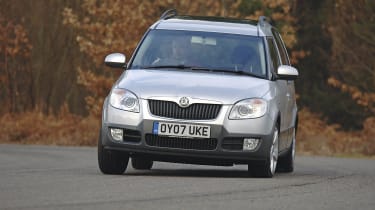 But the more we see the Skoda Roomster Scout’s styling, the more we warm to it. True, there’s something decidedly peculiar about the side profile; it almost appears to be two cars grafted together. Nevertheless, the Skoda has a cleaner overall look than the fussily styled SW Outdoor.

Bosses make much of the fact that the front of the Roomster’s cabin was designed for adults and the rear for children – but exactly how well does the boot cope? It’s certainly not as easy to load as the 207’s. The glass hatch doesn’t open separately, while the rear sill is 117mm higher off the ground and there’s a 170mm drop down to the load floor, too.

Whereas Peugeot has fitted the SW with a folding rear bench, the Roomster gets three individual seats, which gives a much wider range of positions. However, there’s no quick way of collapsing the chairs. Instead, each individual seat has to be folded, tumbled then tethered to the back of the front seat with a retaining strap. But they can also be removed completely. It’s easy to do and frees up a huge 1,780 litres of luggage space – significantly ahead of the Peugeot’s 1,258-litre maximum.

Quality Whether you are folding the Skoda’s chairs, closing the doors or simply sitting inside the car, there’s a real feeling of quality that’s missing from the Peugeot. True, the dashboard isn’t as plush as a VW Golf’s, for example, but it is better designed than the Outdoor’s, with the stereo and heater controls mounted high on the centre console.

There’s more room in the front of the Skoda, the seats are better and so is the driving position and cabin stowage. Adults will find they’re not as cooped up in the back of the Roomster as they are in the rear of the Peugeot. And if they want to increase their legroom further, the two outer chairs can be slid back – although this compromises boot space. It’s important to point out that, as with the 207, the Scout isn’t a true five-seater. The Skoda’s middle rear seat is more spacious than the SW’s, but it’s still only suitable for a child.

Sadly, the VW-derived 1.9 TDI diesel isn’t the last word in refinement. With 105bhp and 246Nm of torque, it’s an equal match for the Peugeot for performance, but it’s noisy on start-up, and louder than the 1.6-litre HDi at speed. The constant drone from under the bonnet becomes tiring on the motorway. While the Skoda’s gearchange has a more substantial feel than the Peugeot’s, it’s not very slick or precise. And when pulling away, it’s all too easy to engage reverse instead of first if you’re not careful.

The Scout’s standard 16-inch alloy wheels look smart wrapped in their low-profile tyres, yet the sporty rubber doesn’t do a lot for the ride. Although the firm suspension helps counter body roll in corners, bumps and potholes are not as well absorbed as they are in the Outdoor.

Yet while the Skoda feels exceptionally composed and stable at all times, it’s neither as agile nor as engaging as the Peugeot. Its steering isn’t as informative, either. But the Roomster Scout is still a safe and easy car both to drive and live with, and offers a very serious challenge to the 207 SW Outdoor.

Price: £14,070Model tested: Skoda Roomster Scout 1.9TDIChart position: 1WHY: The Scout is a funky take on the standard Roomster, but doesn’t lose out on practicality.

Even though the Roomster weighs less, its boxy shape harms economy. It returned 39.8mpg. But it goes further between fill-ups, at 482 miles, due to its larger 55-litre tank.

Poor residuals are a thing of the past for Skoda. After three years, the Scout should be worth £5,529, having retained a reasonable 39.3 per cent of its price new.

While servicing costs are similar, the Skoda needs a check every 10,000 miles. But customers are happier, as its dealers finished third in Driver Power 2007.