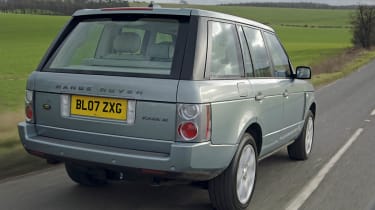 The Range Rover is arguably the world’s most desirable off-roader. From the royal family to footballers’ wives, its image has found fans who appreciate the badge as much as the car itself. The shape is instantly recognisable, but don’t be fooled – this is a big car at nearly five metres long and more than two metres wide.

It’s good looking, though. The clean lines and unfussy treatment at the front and rear enhance that classic profile, while the subtle Lucerne Green paintwork of our test car is a more interesting alternative to silver.

As you’d expect, the Range Rover is big on the inside, too. The boot has a high floor, due to the fact a full-size spare is stored underneath – the Toyota’s wheel is situated on the outside under the body. Consequently, standard luggage space isn’t actually that great at 535 litres, 166 litres less than the Toyota. Fold the seats, though and that rises to 1,756 litres.

Rear passenger legroom isn’t as generous as the Land Cruiser’s, although with 790mm it is far from cramped. The back seats are vast, and the large glass area means there’s an unbeatable sense of space. Indeed, the first thing you notice once behind the wheel is the commanding view out. Getting in isn’t that easy, though, with no standard-fit running boards or grab handles to help. But from the driver’s seat, all-round visibility is excellent, which is ideal in a car this size. Yet it’s the cabin’s lavish ambience that really impresses, and compared to the bland Toyota, the Range Rover is uniquely elegant.

From the hefty gearlever to the chunky switches and solid metal trim on the central console, it’s clear that little expense has been spared inside. The controls are neatly laid out and details such as the analogue clock add to the quality image.

This premium feel continues once on the move. The 3.6-litre engine is superbly smooth and far less noisy than the Land Cruiser’s unit. It’s not quite as powerful, but considering the even heavier kerbweight (a massive 2,717kg) and less aerodynamic shape, a 0-60mph time of 8.7 seconds is impressive. The TDV8’s real strength, however, is refinement, and its relaxed nature and effortless power delivery suit the Range Rover perfectly. It lacks the initial punch of the Japanese car, but gains speed effortlessly. The slick six-speed gearbox is also a highlight, with virtually seamless changes.

However as with the Land Cruiser, the big Brit isn’t great at stopping, despite the fact it’s fitted with Brembo brakes. But as a long-distance cruiser the Range Rover is ideal. It rides brilliantly, gliding over bumps and soaking up rough surfaces without wallowing. It’s every bit as impressive as many luxury saloons.

Like most big off-roaders, it’s not great through bends, but feels less ponderous than its rival – helped by the well weighted steering. Body control is better, too, and while you’re always aware of the Range Rover’s size, it does not seem as heavy as the Land Cruiser. In range-topping Vogue SE trim, it’s a lot more expensive than the Japanese car, at £67,800. The better news is that the entry-level HSE model is priced at £55,395, meaning it’s actually cheaper to own a Range Rover than a Land Cruiser.

You have to sacrifice certain kit, such as the adaptive headlights, sat-nav, rear electronic diff and 20-inch alloys, but even then it comes pretty well fitted out. Terrain Response, air-suspension, the colour touchscreen, heated seats, xenon lights and parking sensors arejust a few of the features that are standard.

Price: £67,800Model tested: Range Rover TDV8 Vg. SEChart position: 1WHY: The ultimate luxury SUV, the Range Rover has an unrivalled status – but it comes at a price.

Despite having to deal with a heavier kerbweight and less aerodynamic shape, the TDV8 unit in the Range Rover averaged 21.5mpg. It comes with a larger fuel tank, too.

SERVICING the Range Rover is just as costly, with three visits totalling £1,250. Land Rover dealers ranked only 17th in our Driver Power survey in 2007.