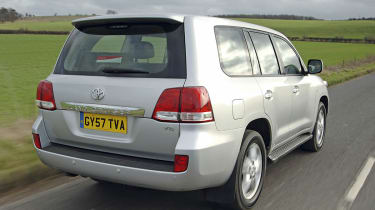 Even the most ardent fan of the Land Cruiser Amazon will admit that the model had the physical presence of an aircraft carrier – and seemed about the same size, too. Well, Toyota has gone even bigger with its replacement, now simply called the V8. It’s 60mm longer and 30mm wider, but even with the increase in size, it’s still not as large as the Range Rover. View it in the metal, though, and it certainly seems the bulkier machine.

That’s down to its high waistline and flared arches, while the gaping grille and chunky bumpers give it a bloated appearance. It’s far from pretty, and certainly can’t match its British rival in the style stakes.

But where it does have the edge is seating. Unlike the Range Rover, the Japanese off-roader comes with an extra row of seats – they offer decent space, yet boot capacity is cut to 259 litres with them in place. Worse still, when stored they only flip up against the sides of the boot, taking up precious luggage room. With fold-flat systems featuring on most seven-seaters, we expected something more sophisticated from Toyota.

Getting to the back seats isn’t easy, either, but there’s better news for those in the middle row, thanks to the superb 860mm of legroom. It’s equally spacious up front, and although the sumptuous seats lack support, they are wonderfully comfortable.

It’s clear that Toyota has attempted to create a sense of upmarket quality in the cabin – everything is well screwed together and all the controls are intuitive and easy to get on with. Sadly, the rather haphazard positioning of some of the switches – plus the lacklustre grey trim – does it few favours. It simply doesn’t have the special feel of the Range Rover.

However, it can happily boast the more powerful engine. The 4.5-litre D-4D powerplant has 282bhp and 650Nm of torque – a 15bhp and 10Nm advantage over the Range Rover – although when you consider it’s more than 800cc larger, that seems less impressive. It’s certainly punchy, and with torque peaking at a low 1,600rpm, there’s a real shove in the back from a standstill. At the test track it was three tenths of a second quicker from 0-60mph at a rapid 8.4 seconds – not bad for a car that tips the scales at more than 2.5 tonnes.

Our biggest gripe with the V8 engine is how noisy it is. At idle, it’s 6dB louder than the Range Rover’s TDV8 at 70dB, and on the move it’s more intrusive, too. This means motorway cruising isn’t as relaxing as you’d expect. The Land Cruiser’s soft suspension set-up doesn’t help here, either.

Despite a new Adaptive Variable Suspension system, designed to give better ride comfort, and a frame that’s 40 per cent stiffer, the Toyota never seems to settle down. In comfort mode it wallows and floats, while in the dynamic setting it patters over anything other than a completely smooth surface. The vague steering is another letdown, and there’s precious little feedback. Along winding roads it’s not as assured as its rival and often feels heavy and lumbering in comparison. Nor are the brakes strong enough.

However, compared to the Range Rover, the V8 is excellent value – undercutting it by a substantial £11,805. There’s only one trim available, and it comes with luxuries such as sat-nav, a reverse parking camera, electric heated seats, a CD changer and Bluetooth as standard. It also has a record-breaking 14 airbags, plus Toyota’s legendary reliability record and excellent dealer network.

Price: £55,995Model tested: Land Cruiser V8Chart position: 2WHY: New V8 replaces the flagship Amazon, and claims to be better to drive and more refined than before.

The new D-4D engine in the Land Cruiser promises decent efficiency with a claimed economy figure of 27.7mpg. However during its time with us, it only managed to return 18.4mpg.

AS the Toyota is so new, our experts have yet to work out its residuals. But the previous Amazon model retained a figure of around 40 per cent – slightly better than the Range Rover.

PRICES have yet to be released, but the old Amazon wasn’t cheap to maintain: three services came to £1,293. But Toyota was fourth out of 32 in our Driver Power 2007 dealer survey.

Both cars are costly business choices, and sit in the top 35 per cent tax bracket due to their emissions. On the higher band, owners will shell out £7,839 a year to run the Land Cruiser.