Has the eagerly anticipated boxer oil-burner been worth the wait? 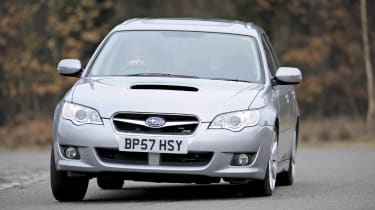 It’s here – that’s the tagline Subaru is using in the Legacy diesel’s high profile ad campaign. ‘At last’ is what we’d like to add. Why Subaru has taken so long to realise it needed an oil-burner when European buyers have wanted one for nearly a decade is anyone’s guess. True, there’s little demand for diesels in Japan and the US, and Subaru is seen as a sporting brand, but diesel power is more practical than petrol for 4x4s such as its Tribeca, Legacy and Forester.

For the time being, the Legacy Sports Tourer and Outback are the only models that benefit from the new 2.0-litre. And, aside from a sizeable bonnet scoop and a boot badge, there’s little to mark out the diesel estate from petrol counterparts. Flush-fit glass, blacked-out pillars and frameless doors help give the Legacy a clean look. It’s not hugely handsome, but is individual enough to stand out from other family cars and compact execs.

Trouble is, despite Subaru’s best efforts, in terms of quality and trim the cabin is no match for the Saab’s – nor is it up to the standards of the likes of the Ford Mondeo. Its layout is uncluttered but also uninspiring, and the generous standard kit isn’t enough to raise the ambience. There are also several niggles: the car re-immobilises itself if it’s not started immediately and the mpg gauge on the dash simply shows plus or minus – there are no figures unless you delve into the comprehensive, but complex, touchscreen computer.

The rear doors are also rather small, inhibiting access, and although legroom easily outstrips the Saab and seat comfort is reasonable, it still doesn’t feel spacious. But the boot is a different matter: despite a low window line, there are 459 litres available thanks to limited wheel arch intrusion, plus it is easy to load, too. Fold the seats and the Subaru has a substantial 362-litre advantage.

The Legacy has no answer to the 9-3’s extra turbo, though, so even though the test track was wet and the Subaru had the advantage of four-wheel drive, it was nearly a second slower from 0-60mph, at 9.1 seconds. Nor did it have an answer to the 9-3’s thumping in-gear pace – but that’s not to say the Japanese firm’s first diesel is a failure.

The firm has over 40 years’ experience with the boxer layout, and has managed to give the derv the same sense of character as its petrol units. The horizontally opposed pistons shake the car to life in the same way, the exhaust note burbles and it comes across as relaxed and easygoing. It’s also smoother, quieter and more refined than the 9-3’s 1.9-litre. Although pick-up is less urgent and there is a trace of lag, power delivery is progressive.

It’s a shame the only gearbox available is a five-speed manual, because the gaps between ratios are too large, especially from first to second in town. At higher speeds the brakes also lacked the power of the Saab’s, taking three metres longer to stop from 60mph, at 37.9 metres.

Nevertheless, there’s a real sense of mechanical robustness to the Subaru. The suspension is very adept at soaking up punishment, so rough roads pose no problems, and even with a fair bit of steering kickback and road noise at speed, the Legacy is a very likeable car to drive.

The springing, especially at the rear, is too soft to be called sporty, but 4WD grip and a sure-footed chassis mean this is a composed and confidence-inspiring car that carries speed effortlessly around corners. It certainly has the edge over the 9-3 in that regard – but is this enough for overall victory?

We were less than impressed by the Legacy’s returns. Our 33.6mpg average was far short of the claimed 49.6mpg. Don’t rely on the fuel computer, either – it was reading 41.5mpg.

Second-hand values aren’t yet available for the diesel, but petrol variants suggest retained values should be fairly strong. A similar spec 2.0 petrol keeps 42.5 per cent of its price.

Costs for the new diesel are yet to be confirmed. Going by the petrol, they are likely to be less than Saab’s. Fifth place for Subaru dealers in 2007’s Driver Power poll implies they’re better, too.

A diesel engine makes the Legacy a realistic option for company car drivers. The boxer unit emits 151g/km of CO2, putting it in the same tax bracket as the 9-3, but its lower price means less duty.