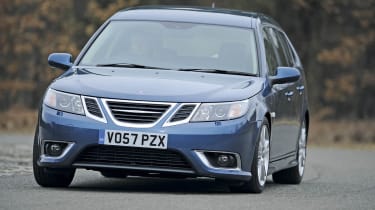 With over 30 years' experience, there's little Saab doesn't know about turbocharging. However, since being swallowed up by GM it is no longer able to design its own engines - in fact, most are shared with the Vauxhall Vectra.

Yet for the time being – at least until the arrival of the Vectra’s replacement, the Insignia, later this year – the 9-3 has exclusive use of the new twin-turbo diesel. The little red TTiD boot badge helps highlight this fact, but otherwise there are few outward clues to its performance potential beyond the twin exhausts.

Overall, we’re not convinced by the Saab’s styling. It may be more up to date than the Subaru, but the unusually thick roofline doesn’t do it any favours. Nor are we convinced by the translucent white back lights and additional chrome at the front which highlights the grille and lower airdam.

Saab has adopted the same strategy inside, with a thin metal strip surrounding the driver’s binnacle. This not only looks odd, but more importantly also reflects badly in the windscreen.

Ergonomically, the cabin is much stronger, due to a wonderfully simple control layout, while the materials are richer and better textured than in the Subaru, with softer touch plastics. There are a couple of things to be aware of, though. The handbrake can trap fingers as it stows flush and although there’s no faulting seat comfort, the anti-whiplash headrests are mounted too far forward, pressing constantly against the back of your head.

Maybe the designers forgot to finish them because they got distracted penning the boot-floor handle. The plane-shaped metal lever is without doubt the best quality release in any car.

If only such attention to detail had been paid to practicality. The Saab has 40 litres less load space, at 419 litres, and rear legroom that’s 70mm shorter. Back-seat comfort isn’t too bad, but the 9-3 is not a roomy car, with an almost identical wheelbase to the Legacy (even though it is 150mm longer, plus wider and taller).

We were still surprised that, despite not having to lug around weighty 4WD underpinnings, the 9-3 weighed 120kg more than the Legacy. However, its 30bhp and 50Nm power advantages ensure acceleration is more urgent, with all in-gear dashes polished off in short order.

Apart from a noticeable step at 1,700rpm, the power delivery is completely linear and the sequential turbos – a small one for initial response, followed by a larger version to boost mid-range and high-end power – operate seamlessly.

However, towards the top of the revs the Saab engine loses its composure, becoming coarse – it’s not as well mannered as the Legacy’s flat-four. Nor does the gearshift feel as mechanical – but it is a lot slicker around the gate and the benefit of the sixth ratio should not be underestimated.

The Saab’s brakes also proved strong – a stopping distance of less than 35 metres in the wet is impressive, although the pedal is spongy underfoot. But while the engine and anchors deliver good results, the 9-3 SportWagon isn’t a great car to drive. The suspension isn’t as supple as the Subaru’s, the steering is slow to react to inputs and it’s nose-heavy around corners, coming across as rather unenthusiastic.

It is a more relaxing motorway car than the Subaru and is arguably easier to drive, too. But a price tag of over £27,000, while in line with most German rivals, looks expensive in this company.

It ’S more powerful than the Subaru, yet Saab has done well to keep the TTiD engine’s CO2 emissions low – although our actual result was 75g/km higher than claimed.