The Subaru Legacy is only available as an estate, but its tough mechanicals and four-wheel-drive chassis make it a capable workhorse 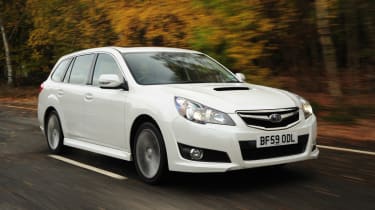 When the latest Subaru Legacy made its UK debut in 2009, it created a stir by being offered in estate guise only. Dwindling sales of the four-door saloon meant that bosses decided to axe it from British showrooms. Look past the Legacy’s slightly ungainly styling and you’ll discover a practical, dependable and likeable family holdall that’s a quirky alternative to the Ford Mondeo or Peugeot 508 SW. All versions benefit from the trademark Subaru symmetrical four-wheel drive system and a range of characterful flat-four ‘boxer’ engines. There’s a limited number of trim levels to choose from, and all are quite pricey, but on the plus side standard equipment levels are high.

There’s a limited engine line-up to choose from, with just two petrols and one diesel available. All use the trademark Subaru flat four layout, meaning the units are smooth and keen to rev. Entry-level models get a 148bhp 2.0-litre petrol that feels a little gutless in such big car, while the more powerful 165bhp 2.5-litre unit is only available with the firm’s Lineartronic CVT auto transmission. Best is the punchy and refined 2.0-litre diesel. Mated to a six-speed manual gearbox, it suits the no nonsense attitude of the Legacy. A 10-way adjustable electric driver’s seat is standard, so getting comfortable isn’t a problem. What’s more, the combination of good visibility and a poised and grippy four-wheel drive chassis makes the Legacy surprisingly entertaining. Only the firm ride lets it down.

If your monthly motoring budget is tight, then steer clear of the petrol models. Worst is the 2.0-litre petrol with CO2 emissions of 199g/km and claimed fuel returns of just 32.8mpg. The 2.5-litre fares marginally better and is much quicker in a straight line. The diesel upholds the eco-friendly honours for the Legacy. However, without stop-start technology or regenerative braking, its figures of 161g/km and 46.3mpg are no match for rivals SEAT Exeo ST or VW Passat estate. Still, decent residuals of around 40 per cent make the Subaru a solid investment. And with so much standard kit, you won’t be splashing out on any expensive options, though this is reflected in its high price.

A gaping grille, large headlamps and bulging wheelarches help the Subaru Legacy stand out from the crowd, but the Ford Mondeo estate and Vauxhall Insignia Sport Tourer have more kerb appeal. Buyers can choose from S, SE and SE Nav Plus trims, with the latter models getting a racy bodykit and 18-inch alloys. Inside you’ll find a solid and workman-like cabin. It’s robustly screwed together, but materials don’t feel as upmarket as rivals, while the dashboard design is dated. Still, there’s plenty of kit, with all versions getting climate control, Bluetooth connectivity and an electric sunroof. Go for the SE and you’ll benefit from leather seat trim, while Nav Plus models add a rather out dated sat-nav system.

Given its size and estate bodystyle, there’s a decent amount of space inside for five adults, while the large glass area creates a bright and airy atmosphere. There’s a decent amount of storage, with plenty of cubby holes, deep door bins and a large glovebox. Opening the large tailgate reveals a usefully low loading lip, plus a generous 526 litres of carrying capacity. Fold the standard 60/40 split-fold rear bench flat and the available space increases to a cavernous 1,677 litres. And of course, the combination of grippy four-wheel drive and torquey diesel engine makes the Legacy an accomplished towing vehicle.

A five-star Euro NCAP rating underlines the strength and safety offered by the Subaru. All versions benefit from electronic stability control, six airbags and an audible warning if you don’t buckle your seatbelt. The Legacy also gains extra points for its permanent four-wheel-drive system, which delivers reassuring traction in all weathers. Buyers can also expect faithful service from the rugged mechanicals fitted to the Subaru, while the solidly constructed cabin feels up to the tough demands of family life. And while maintenance costs aren’t the cheapest, Subaru dealers always score well in our Driver Power satisfaction surveys, so you can expect top notch service.

Subaru WRX and Legacy Concept at the LA Motor Show 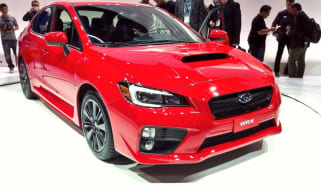 Subaru WRX and Legacy Concept at the LA Motor Show

New Subaru WRX unveiled and could be coming to the UK. Legacy Concept previews next Legacy saloon
Subaru Legacy 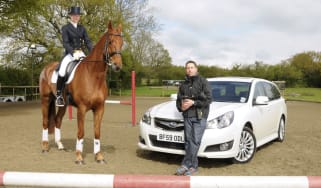 Our Legacy is about to gallop off into the sunset after eight months. Has it proven a thoroughbred with us?
Subaru Legacy 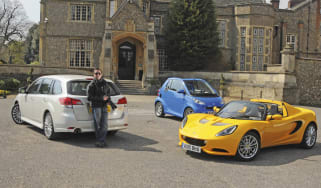 Our fleet workhorse plays a vital role in photoshoots across UK, but miles are taking their toll
Subaru Legacy 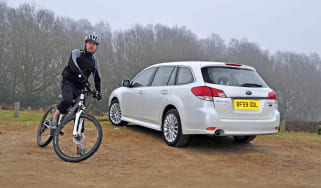 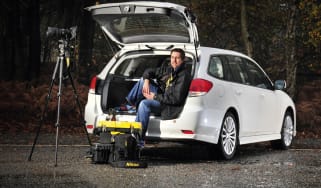 After a flat start, our Sport Tourer is making up for lost time.
Subaru Outback 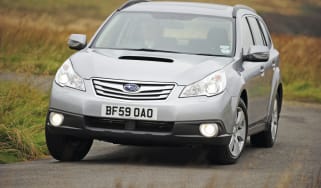 We try crossover version of Estate-only Legacy
Subaru Legacy B4 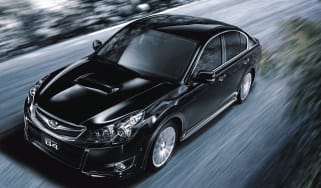 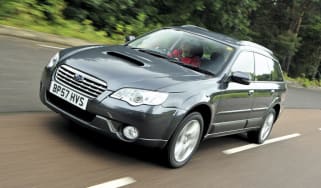 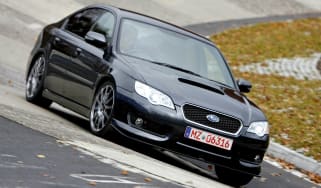 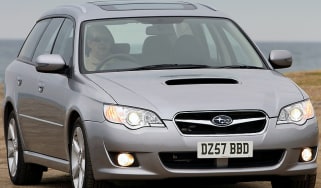 Subaru’s diesel is impressive – pity about its thirst.
Subaru Legacy 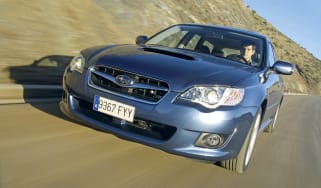 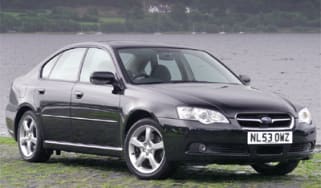 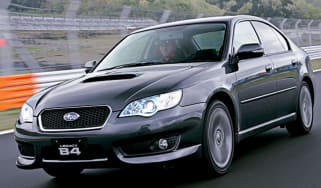 When it comes to leaving a Legacy, Subaru knows what it's doing. However, even the Japanese company's talented team of engineers couldn't resist tinke…
Subaru Legacy 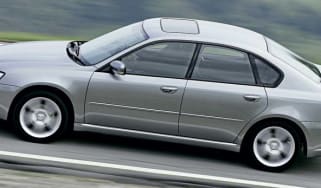 With its wide wheel-arches and huge spoilers, Subaru's rally-bred Impreza demands plenty of attention. The Legacy, on the other hand, is altogether mo…
Subaru Legacy 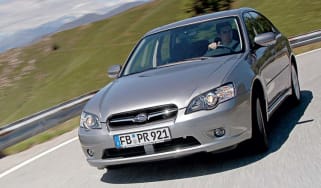 Why produce one facelifted model when you can do two? Not con- tent with overhauling its Forester, Subaru has found time to tweak the Legacy line-up, …
Subaru Legacy 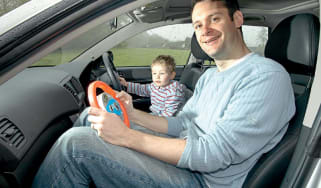 My son Connor is desperate to follow in daddy's footsteps when it comes to earning a living. But as you can see, he's got a while to go before he can …
Subaru Legacy 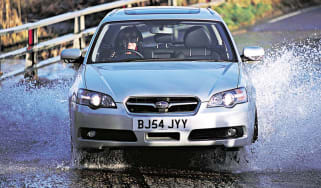 Here are some economy figures for you. If you were driving a Laguna with a 3.0-litre V6 under the bonnet, Renault says you should return 28mpg. If it …
Subaru Legacy 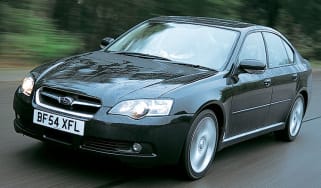 Mention performance Subarus, and most people will think of the rally replica Impreza WRX. The four-wheel-drive saloon has been a huge hit for the Japa…
Subaru Legacy Outback 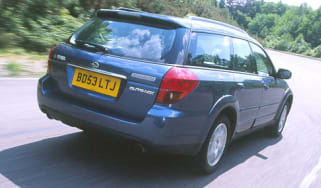 Auction website eBay has a lot to answer for. Apart from spelling the end for junk shops across the UK, it recently sent me on a five-hour, 250-mile r…
Subaru Legacy 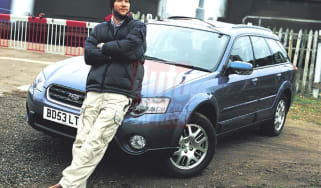 Let the train take the strain? Not likely! Our new Subaru Legacy Outback long-termer is a far more comfortable and reliable way to commute than the ra…
Subaru Legacy 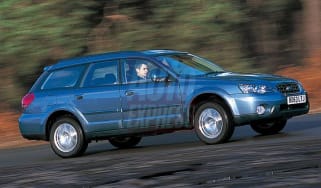 Overkill is a big problem in the motor industry. People drive around in sports cars capable of 150mph when the speed limit is only 70mph.
Subaru Legacy 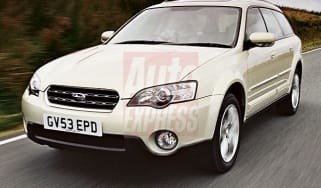 It's not only high-performance cars that Subaru is keen to develop for UK drivers. The fast-growing SUV market is becoming increasingly important for …
Subaru Legacy 3.0R 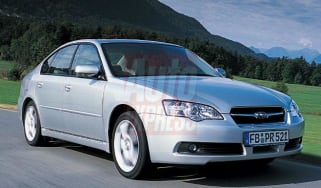 Focus RS owners don't just drive a 'Ford' and M3 fans own more than a 'BMW'. So why do Impreza owners refer to their cars simply as a 'Scooby'? It see…
Skip to HeaderSkip to Content