We drive japan’s latest executive saloon. Is it now a contender? 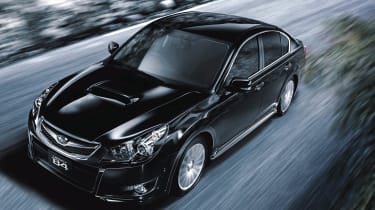 The Legacy has always had a small but loyal following – what Subaru bosses have been desperately chasing is wider appeal for their executive express. This time around, they’ve almost succeeded. The latest generation is better in every way, and not only offers more space inside, but also greater quality. This high-performance B4 model provides fine performance, superb traction and plenty of driver appeal.

THINK of a high-performance four-wheel-drive saloon, and Audi’s S4 will normally spring to mind. But if you’re in the market for a fast but practical executive, should Subaru’s new model be on your list?

The company is attempting to rebrand the Legacy with this latest generation. Bosses hope to change it from a capable but alternative choice to a serious contender in a market dominated by theAudi A4, BMW 3-Series and Mercedes C-Class.

It’s all-new from the ground up, and is not only bigger than before, but also better built and more powerful. So we put the B4 2.5 GT model through its paces. See the Legacy on the road and it has plenty of presence. It’s chunkier and more muscular than the model it replaces – although it’s not as striking as the concept displayed at January’s Detroit Motor Show.

Pedestrian crash laws have forced Subaru to redesign the front end, and the bonnet is raised by 100mm as a result. Further back the car is more convincing, with aggressive flared wheelarches housing huge 18-inch alloys and a neatly penned tail.

The newcomer is nearly 100mm longer, 50mm wider and 80mm higher than before, plus the wheelbase is 80mm longer. As a result, there’s more space inside, especially in the rear. The designers have also focused on improving quality – and to a certain extent, they’ve succeeded. Higher-grade materials give the interior a luxurious feel – these include soft leather on the seats and a polished aluminium-style finish for the centre console. But it’s still a long way behind the standard offered by Audi.

Under the bonnet, the B4 gets a revamped 2.5-litre turbocharged flat-four-cylinder boxer engine. This produces 281bhp at 6,000rpm – up from 256bhp – while torque rises 7Nm to 350Nm between 2,000rpm and 5,600rpm. Plus, because the turbo sits closer to the exhaust manifold, it’s more responsive and suffers less lag.

Subaru’s SI Drive system gives owners a choice of three throttle response settings via a dial on the centre console. Yet even in the softest mode, the engine remains very muscular. It powers the car from 0-60mph in only five seconds, and emits a characterful warbling sound.

In-gear response is also impressive, and while we would still prefer the six-speed manual version, the automatic box shifts smoothly. Drivers can also change up or down using the polished aluminium paddles on the steering wheel.

As ever, though, the engine is let down by its poor economy and high CO2 output. However, to offset this, buyers can choose a diesel. Subaru says there will be a newer, cleaner version of the outgoing Legacy's 2.0-litre oil-burning unit available when sales start next year.

On the road, the Legacy feels even more planted. In addition to a four-wheel-drive transmission, it features a new double-wishbone rear suspension set-up. The B4 turns into corners more sharply, while the rear end stays low and flat, and generates more grip than ever before. Plus, while the new power-steering could do with more weight, ride comfort is excellent.

It adds up to an impressive all-round package – one that is a genuine competitor to the very best German models. Yet it will still take a brave buyer to choose the Legacy over an S4.

Rival: Audi S4 latest S4 has traded in its V8 for a more efficient V6, but the supercharged 3.0-litre unit is just as potent. While power is down 11bhp to 328bhp, torque is up 30Nm to 440Nm – which means storming pace. Plus, thanks to the engine’s smaller capacity, the Audi promises respectable 29.4mpg economy.