Our Legacy is about to gallop off into the sunset after eight months. Has it proven a thoroughbred with us? 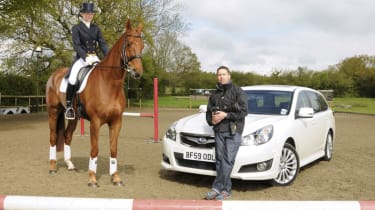 Take a look at the picture on the left, and you’ll find it almost impossible not to make a quip about me trying out alternative forms of horsepower!

However, there is a serious reason why our long-term Subaru Legacy is parked up alongside this four-legged thoroughbred. In an effort to push the brand upmarket, the Japanese firm has been sponsoring Britain’s high-profile showjumping and eventing championships. So, for its last photographic assignment  before it leaves the Auto Express fleet, I took our versatile estate to meet one of the UK’s up-and coming eventers, Emily Llewelyn.

Not only is the 20-year-old one of our brightest hopes for London’s 2012 Olympic Games, but she’s also a brand ambassador for Subaru. However, after more than six months behind the wheel of our Legacy, I don’t need any further persuasion from Emily about the benefits of owning one of the firm’s cars. Practical, reliable and spacious, the four-wheel-drive Subaru has become as essential to my job as a zoom lens and tripod. I’ve even come to like the car’s bold looks.

With its distinctive swept-back headlamps and prominent bonnet scoop, the Legacy certainly stands out from the crowd. Inside, the build quality has really impressed.

Despite being used as a photographer’s workhorse – and an occasional removal van by my colleagues – the Subaru’s cabin is still in top condition. If only the dashboard design didn’t look so dated. The Sport Tourer also scores full marks for reliability, as the diesel-engined estate has barely missed a beat.

The oil level warning light came on just before its first service was due, so I dropped the car into AMC Chelmsford, Essex, for a routine service. Friendly and helpful staff greeted me, while the bill came to a reasonable £218. Better still, after its health check, the flat-four unit felt as smooth and eager as ever.

The only real saga was the stone-chipped windscreen. Supply issues meant that it took a few weeks to source new glass, after it was cracked by a stray stone. Autoglass in Chelmsford eventually got hold of a replacement, fitting it in an hour or so at a cost of £470.

However, even this niggle failed to detract from my time with the Subaru. It takes a little getting used to, but it’s not long before the characterful Legacy gets under your skin. Its huge boot swallows everything, and the four-wheel drive was a big bonus in the winter weather.

It may have been outclassed by the Skoda Superb and Ford Mondeo in a recent group test. But if you want an alternative, no-nonsense family estate with go-anywhere ability, you should trot down to your Subaru dealer.

“Four-wheel-drive family estates are back in vogue, so now Subaru faces competition from Skoda, Vauxhall and Volkswagen, to name but a few.”Ross Pinnock Road test editor