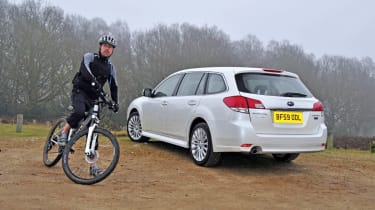 As the staff photographer of the busiest car magazine in the business, I’m often told to get on my bike – and our long-term Subaru Legacy is helping me to do so at every opportunity! This clichéd brush-off is usually delivered by unhelpful security guards at photo locations, but our Sport Tourer takes it literally.

The big estate has been part of the Gibson family for a few months now, and I don’t know where I’d be without its interior space and flexibility. I’m able to throw my mountain bike in the back – along with all the gear I need for a long ride – and head for the hills. And when I get there, the Legacy’s four-wheel-drive set-up takes muddy countryside car parks in its stride.

The recent bad weather also helped to underline the value of 4x4 technology. On one particularly fraught journey home, I saw countless vehicles stuck in the snow or skidding dangerously, but the Legacy always found traction. I still can’t think of any real criticisms, although the notchy gearbox I mentioned in the car’s first report (Issue 1,093) hasn’t improved – selecting first and second can be tricky when the transmission is cold. This is a shame, as the quiet engine is excellent and delivers its torque in a smooth and linear way. On motorways it has really usable power and the ride comfort is let down only by the low-profile tyres and large alloys, which result in too much kickback through the wheel.

One thing I’ve grown to really appreciate is the Legacy’s electric handbrake. In the past, I’ve never really got on with these things but, despite being hidden awayto the right of the steering wheel, it works really well. Using the hill-hold function makes even more sense, and once you’re confident operating it, the system becomes second nature.

The Legacy is proving to be as popular with my Auto Express colleagues. Road tester James Disdale borrowed the Subaru for a house move. He was also impressed with the amount of space inside, the refinement of the diesel engine and the simple seat-folding mechanism, which features levers in the boot to release the rear seatbacks.

The boot still fails to latch sometimes, as I mentioned in my first update, but a trip to the dealer beckons. Let’s just hope I’m not told to ‘get on my bike’.

“As with many Subarus, the Legacy’s charms are slow-burning. Only after a few hundred miles of motoring do you come to appreciate its refinement, comfort and solid motorway stability. In slippery conditions, its grippy AWD transmission makes a mockery of rivals’ less effective traction control systems.”