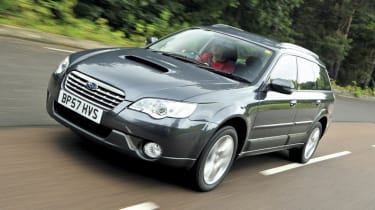 In the past, the Legacy Outback has been bought by a core of mainly rural-based Subaru enthusiasts – but this new diesel means its appeal is much wider. While Audi’s A6 Allroad and the Volvo XC70 are still better all-rounders, the diesel Outback is economical, refined and very capable in the rough stuff – and for those reasons it’s a viable choice in today’s market.

It’s easy to underestimate the importance of Subaru’s new diesel engine. In the current climate of rising fuel prices and CO2-based taxation, the firm would be in trouble without it.

We’ve already tested the 2.0-litre flat-four cylinder unit in the Legacy Sport Tourer, but how does it fare in the crossover Outback model? Well, producing 150bhp and 350Nm of torque from a lowly 1,800rpm, it’s not short of pace.

The benchmark sprint from 0-60mph is dispatched in less than nine seconds, and there’s decent in-gear flexibility, thanks to its turbo-assisted urge. The five-speed gearbox has long ratios, though, and there’s no doubt that a six-speed transmission would make the Outback even more responsive.

However, buyers can make useful savings at the pumps. Official combined fuel economy is 48.7mpg, and with CO2 emissions of 153g/km, the diesel costs £65 a year less in road tax than the 2.5-litre petrol model. In 2009, the difference will be £210. But perhaps the best feature of the new engine is its refinement. Subaru has added lots of sound deadening, so from the inside the unit has the note of a gruff petrol motor, with the firm’s characteristic flat-four cylinder ‘warble’ present under acceleration.

As for the rest of the Outback experience, it’s business as usual. The raised suspension and 4x4 transmission mean a comfortable ride and decent off-road traction. But on tarmac, there’s lots of body roll, grip from the front wheels is in short supply and the steering lacks feedback.

Inside, you get plenty of kit, build quality is solid and boot space is reasonable. Yet it’s the engine that’s the real star.