Our fleet workhorse plays a vital role in photoshoots across UK, but miles are taking their toll 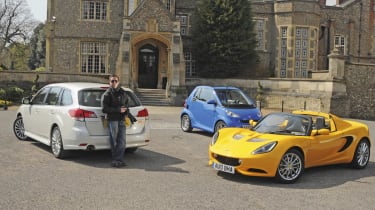 ALL the cars on the Auto Express long-term fleet are given a thorough work-out, but few get tested quite as hard as our Subaru Legacy.

Every aspect of its performance is regularly put on trial as I travel to all corners of the UK photographing road and product tests, features and first drives for the magazine. Most recently, as this shot shows, the Legacy was busy attending the British launch of the new entry-level Lotus Elise, which we combined with a photoshoot for a Brabus-tuned Smart.

As a result of all these miles, the Legacy has been covering every type of highway imaginable, from leafy Sussex B-roads to the M25.The big estate has now done 11,976 miles, though,and this has taken its toll on the engine. While the boxer diesel still excels on the motorway, where the Subaru cruises comfortably, it was beginning to sound laboured on cold mornings – and then the oil level warning light flicked on.

The car was clearly trying to tell me something. So, I topped up the level with a litre of the recommended fluid and booked the Legacy in for its 12,000-mile service. The extra oil turned off the warning light, but did nothing to improve the flat-four engine’s gruff soundtrack.

Fortunately the experts at AMC Chelmsford in Essex know what they’re doing because, only three hours after I dropped off the car for its service, it returned from the dealer sounding and driving more smoothly.

It seems an oil change and engine flush have done the trick. The technician told me the warning light had come back on after the service, but had since gone off again, so I’ll be keeping an eye on this to make sure the car hasn’t got a faulty sensor.

The biggest problem I’ve faced so far has been replacing the cracked windscreen. New glass for the Japanese machine seems to be hard to come by – an availability problem I’m familiar with after struggling to find a tyre for the Legacy soon after it arrived last November. I thought I’d solved the screen problem by booking the car in to have a replacement fitted by Autoglass. However, I arrived at the allotted time to be told the workshop was expecting an old-shape Legacy – and that the screen available wouldn’t fit my model.

I’d supplied the firm with the Subaru’s reg plate on the phone and explained that it also has rain sensors fitted, so I was surprised by the confusion. The staff did their best to source a screen on the day, but it’s taken three weeks to find a replacement – which is both inconvenient and irritating.

Issues such as this are beginning to take the shine off a car I really want to like. But with a fresh bill of health from the garage and a new windscreen due to be fitted in the next few days, the Legacy can finally get back to doing what it does best...

“The Legacy is big and practical, but fun to drive, too. Buyers after a four-wheel- drive car might think an Audi is the only option, but thisis an interesting alternative.”